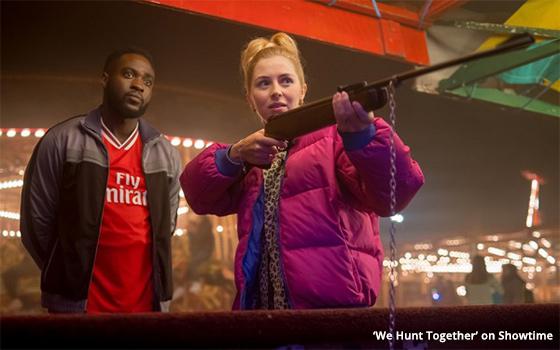 A new drama series about a couple who kills together is the kind of TV show that just might have you swearing off TV altogether.

It is almost comical that a subscription cable channel (in this case, Showtime) would ever consider a show such as this one as a potential driver of subscriptions and/or viewership.

But then again, I freely acknowledge that the people who work at TV networks and streaming services who say yes to the shows they air know more about such things than I do.

Maybe they are certain that given the condition of our world today and its popular culture, an audience for this new show called “We Hunt Together” can be found that will be ample enough to justify airing it -- or in this case, importing it from England.

The show is a six-episode murder drama that premieres Sunday night. Through most of the first episode, which I previewed a few days ago, I almost gave this violent show a pass -- which is to say, I was beginning to like it.

The couple at the heart of it consists of a recent African immigrant to England who has applied for asylum and a young woman whom he meets at a nightclub where he is working as a doorkeeper.

They are played by Dipo Ola and Hermione Corfield. He has a murderous past as a former child soldier in the war-torn nation he has escaped from.

She may or may not have ever murdered anyone before they met, but she persuades him to help her commit one now.

After the crime has been discovered, another pair of partners emerges on the show -- two police detectives who appear to have been created intentionally to mirror the couple whose crime they are investigating.

This pair consists of a black male who is either an immigrant to England or the son of immigrants, and a white woman who appears to have no life other than her work as a homicide detective.

The partners in each couple are new to each other too. The killer couple has just met. The two detectives have just been partnered together, and this is their first case.

This general outline of the show is not a bad foundation on which to build a series -- even a limited series such as this one.

But the experience of watching this show went south for me in the sequence near the end of the first episode in which the murder is committed. It was disgusting, even by the standards of murders dramatized on television these days.

And once again, I am left to wonder why our entertainment industry reverts time and time again to depictions of ritualistic murders in its efforts to entertain us.

Swear off TV? Yes, I can see how that could happen after watching enough shows like this one.