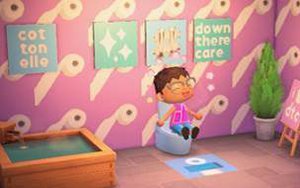 Two major consumer brands have become the latest products to find a place within the Nintendo game, “Animal Crossing: New Horizons” (known as ACNH) that has become a sensational pandemic-era phenomenon.

What Kimberly-Clark’s Cottonelle toilet paper, and Gillette’s women’s razor line Venus, are doing inside a video game would be easier to explain and describe if you were one of the millions of people -- many of them millennials -- who have played this and other “Animal Crossing” editions.

In ACNH, players take on the role of the only human on an island filled with 10 cheerful, lovable  anthropomorphic animals. It was designed for little kids, and that’s who may have played the first incarnation of "Animal Crossing" in 2001.

But now they’ve grown up to be millennials trapped in this pandemic.  And the new “Animal Crossing: New Horizons” has turned to be an insanely popular, calming video game on the island where things kind of turn out right.

In the first six weeks after its release in March, this ACNH edition sold 13 million copies.

“As odd as it is for me to say, ‘Animal Crossing’ provides a sense of stability in an otherwise uncertain world,” wrote a student essayist in the Duke University publication The Chronicle. “Users can truly do what they wish, with established goals and missions throughout the game. The repetitive pace of the game is a break from the pressures, anxiety and violence in our world.”

A blogger for the online automation tool Zapier adds, “You also get to fish, catch bugs, and plant flowers, all in real (and happy) time."

Now Gillette’s Venus new Skinclusive Summer Line got together with digital designer, Nicole Cuddihy, to co-create new ACNH avatar designs  "that serve as the largest offering of skin-inclusive designs to ever be available within the game,” the brand announced.

“This collection is taking ‘Animal Crossing’ from just a few representations of skin to 19 different skin types in 8 in-game skin tones, resulting in over 250 designs that include common skin realities like freckles, acne, hair, cellulite, scars and stretch marks, and more unique and under-represented skin like vitiligo, tattoos, psoriasis, and differently abled bodies.”

Explaining Cottonelle's new promotion to a non-player is difficult.“Animal Crossing” recently added a part of the game where a player can go to the bathroom and poop fruit from the island. That was news enough for Cottonelle, which created interesting wall patterns that players are now encouraged to add to their ACNH environments — not necessarily in the bathroom.  Artist and gamer T-Pain, who has an elaborate game bathroom that he’s known for, will be going through some of the players’ islands to check out ones he thinks are cool.

Neither Cottonelle nor Venus are out there all alone on the “Animal Crossing” island. Other marketers have found it too. A feature lets people dress their avatars, and Net-a-Porter, Gucci, Dior, 100 Thieves and Burberry jumped at the opportunity. ACNH  has its own Instagram account just for fashion.