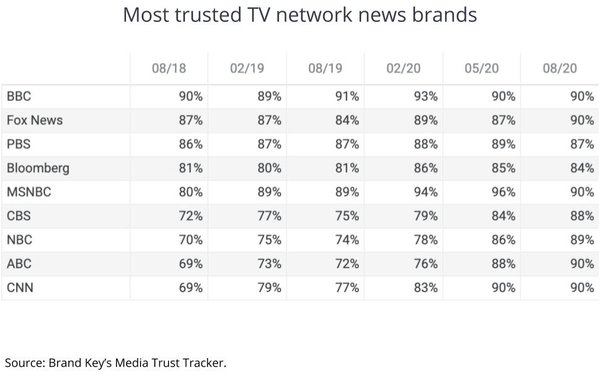 Two years into a unique tracking study measuring the role that viewers' trust has on the strength of their brands, the major network news organizations are approaching parity — and at relatively high levels.

The research and analysis, which has been conducted by Brand Keys since August of 2018, shows five networks — BBC, Fox News, MSNBC, ABC and CNN — tied with 90% of TV viewers attributing trust to the value of their brands. With the exception of Bloomberg (84%), the other major news networks are within a couple of points of 90%.

"Given the increase in the actual import of real news to viewers, TV brands have had to up their game," explains Robert Passikoff, Brand Keys founder-president.

"That’s most clear with CNN, revising its format and approach about a year ago, and MSNBC, especially during the the impeachments," he continues. "News became more important to, well, everyone, and delivery became better, i.e., more trustworthy. You see that everyplace with the exception of Bloomberg, which is still regarded mostly as a financial expert."

Passikoff said network TV news trust "relates to a number of factors when it comes to news shows," but the most important one is they provide a "fair presentation of content important to viewers."
As part of the most recent tracking study, Brand Keys probed TV news viewers about which news topics were most important to them.
Not surprisingly, the COVID-19 pandemic was the top story (cited as the reason 31% of viewers watch news networks), followed by the economy (27%), the 2020 election (20%), the re-opening of schools (15%), and national protests (7%). 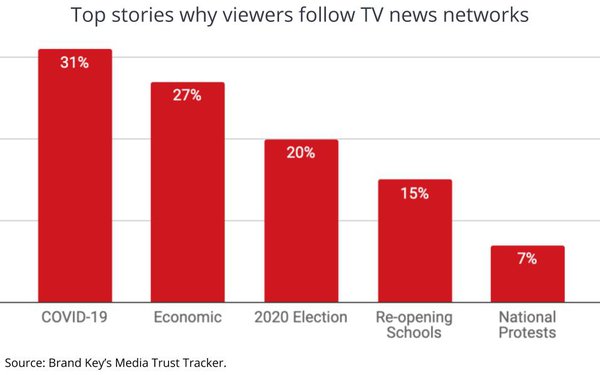