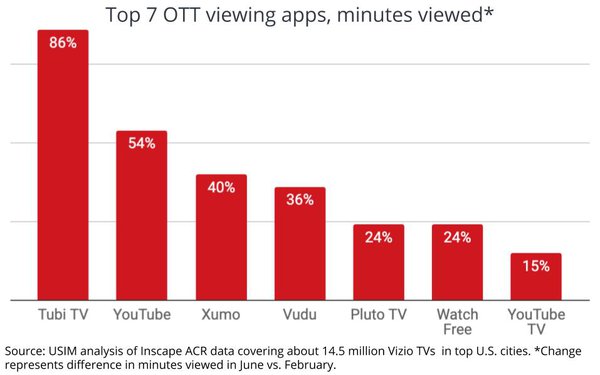 The COVID-19 pandemic has been a "perfect storm" that has accelerated adoption and usage of app-based TV viewing that has brought the OTT marketplace to an inflection point that is likely to fundamentally alter the way advertisers and agencies plan, buy and think about the TV advertising mix. That's the top line conclusion of an in depth analysis of app-based TV viewing data being released this week by independent media services agency USIM.

While linear TV minutes viewed via cable and satellite TV grew about 5% during the period, its share of total viewing declined 6.5 percentage points to 49% do to corresponding increases in streaming services and app-based TV viewing.

Free, ad-supported TV and movie service Tubi TV, which was recently acquired by Fox for $440 million, saw he greatest surge, rising 86% between February and June, while all other app-based services grew significantly (see chart above).

The analysis also found that Apple TV was the biggest beneficiary in terms of minutes viewed among the major devices, followed by Roku, Google's Chromecast and Amazon Fire (see chart below).

The analysis doesn't control for seasonability, but historically TV usage levels are higher in cold weather months like February and lower in warm season months like June, so the trend appears to support USIM' perfect storm scenario.

"It has opened the floodgates," says Rob Jayson, executive vice president-insights and analytics as USIM, adding that the pandemic conditions of people stuck at home, starved for content, and in many cases, looking for more cost-effective alternatives to subscription TV services, has essentially forced millions of Americans to sample app-based OTT services that might otherwise have taken years to develop.

"Now that people have discovered that they can get this for free, I think the shift will continue," he said, adding that the consumer behavior changes is also unlocking tremendous opportunities in terms of OTT advertising inventory, especially the kind that can be leveraged to target people at an addressable and hyper-local level.

That, says USIM President Russell Zingale could fundamentally alter the way some advertisers and agencies plan and buy television.

He says many have already begun to embrace addressable TV advertising as more inventory has been made available in recent years, but the acceleration of app-based TV viewing represents an inflection point that will make it difficult for others to ignore.

"Addressable was always kind of an add-on, but its becoming a primary need," he says, adding, that the shift likely will lead to changes in the way advertisers think about reach and frequency planning models.

"Addressable gives us the ability to control frequency to the household level, so we’re not just bombarding 25 exposures to a household," he points out.

While it may be impossible to predict the long-term impact the pandemic and economic recession will have on America's viewing patterns, USIM's Jayson says many Americans have already changed the way they think about their main screen viewing, and that app-based services are now a permanent part of their behavior.

He said the resumption of live sports programming -- especially if the NFL season resumes -- will bring many Americans back to linear TV channels, but that apps and streaming services are now a permanent part of their household viewing. 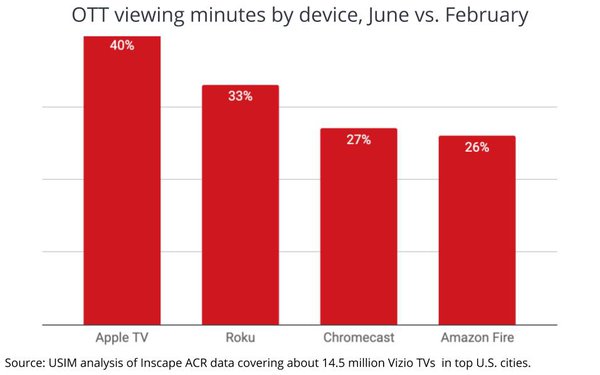