Lincoln's Joy Falotico, Marketer Of The Year, On 'Sanctuary,' COVID And Bronco 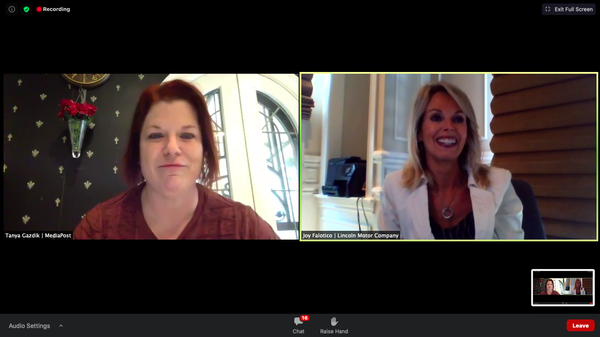 At Tuesday's Marketing:Automotive event via Zoom, Joy Falotico, CMO and president, Lincoln and Ford, right, was virtually presented with MediaPost's Marketer of the Year trophy as she sat for an interview with Tanya Gazdik, senior editor, automotive at MediaPost.

Gazdik noted that sales for Lincoln were up 8.3% in 2019 while most other luxury brand were level with 2018 or even declined. Falotico talked about launching the Aviator last year,  when Lincoln "hit our stride" with "The Power of Sanctuary" with — who else — Matthew McConaughey. "We saw results from that," she said, with Aviator gaining 10% share in under one year.

Back in March, Lincoln was about to launch its new SUV. When COVID hit, it pulled the ads and leaned instead into as pick up-and-delivery ad that turned the message into helping Lincoln car owners that needed service. The messaging also offered payment deferral options and, as time wore on, new messaging evolved into being able to defer payments for new models.

The same thing happened on the Ford side, Falotico said, when March Madness was canceled. "We pulled the ads and leaned into existing footage," she said. "Our agency pulled together an ad built off 'Built Ford Proud.' It became 'Built to Lend a Hand.' The magic was in the speed."

As for changes that may become permanent, she noted that virtual communication "exceeded our expectations. Some of that will be with us to stay."

Falotico said Ford was very happy to "welcome a new horse back to the stable with the Bronco," which had been off the market for a quarter century. Bronco fans had been finding old Broncos and refurbishing them. There were informal clubs, including a Ford employee group called Bronco Underground. The new machine has "the toughness of the F150 and the spirit of the Mustang."