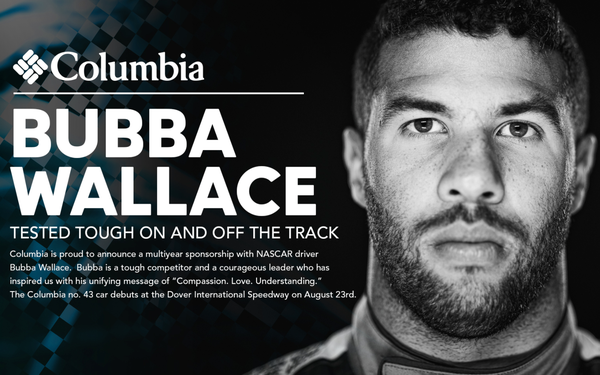 Wallace, an avid fishing, hiking and camping fan, has also become a lightning rod in the red state world of NASCAR. The only African-American competing in the sports' top tier, he helped organize its recent banning of the Confederate flag at race events. Many fans are flying it anyway. And in return for his efforts, Wallace has been booed at races. At a recent qualifying event, many fans cheered when he crashed into a wall.

Columbia says it chose the 26-year-old, who emblazoned his car with "compassion, love, understanding," as an advocate for equality and inclusion. "He is truly Tested Tough, both on and off the track."

The announcement comes on the heels of Columbia’s second-quarter financial results, with both sales and profits hurt by store closures related to the pandemic. And while apparel continues to be one of the most wounded categories, observers believe it is in a good position to recover.

Net sales dropped 40% to $316.6 million, and it posted a loss from operations of $70.3 million. That compares to operating income of $16.4 million in the same period a year ago.

The Portland, Oregon-based Columbia says that in the direct-to-consumer channel, ecommerce sales jumped 72%.

Some observers say the company is well positioned for a comeback, especially compared to other apparel brands.

"While revenue is expected to remain pressured in the second half, there may be some upside potential if consumer focus on outdoor activities supports cold-weather apparel demand," writes Jonathan R. Komp, an analyst who covers the company for Baird.

Komp thinks its reduction in expenses and prioritizing digital marketing investments can help it navigate the uncertain environment. "Marketing focus has been shifting more meaningfully behind social/digital engagement," he says. And its ecommerce efforts "should take a major step forward with the third-quarter implementation of a new mobile-based platform that upgrades the experience and enables broader targeting/loyalty capabilities."