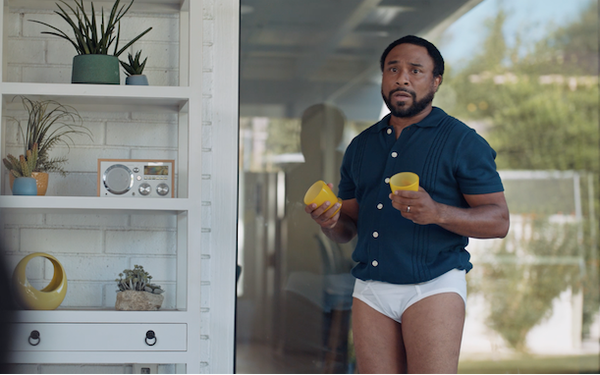 While Extra gum wants people to interact in more non-virtual ways during the pandemic, Snickers imagines an awkward misadventure that could typify the resumption of in-person gatherings.

Extra’s “Real Friend Request” was created to emphasize how personal relationships have changed in 2020 as parents and siblings are stuck at home. It’s the latest iteration of the brand’s Give Extra, Get Extra creative platform.

The 30-second spot from Energy BBDO in Chicago opens with 14-year-old Celia chewing gum and tethered to her phone. Her older sister Lena tries to ask for a piece of gum but is ignored.

So Lena puts pen to an Extra wrapper and writes “NEW FRIEND: Lena” along with boxes Celia can check for “CONFIRM” or “DENY.”

No selection is necessary as the sisters exchange loving smiles.

“Gum is a category that is primarily consumed on the go, whereas more people are spending much more time at home. What we’re most excited about this work is that we’ve leaned into the relevance of the day to day that we’re living right now.”

The spot from BBDO New York is running on digital and social platforms as well as more than 35 television networks. Specific placements include “The Today Show” and “The Big Bang Theory.”

It opens with a woman on her patio telling two visitors, “It’s so good to see you guys.” She then calls to her domestic partner, who is inside: “Hon, out here.”

The partner emerges wearing a dress shirt, socks and underwear. He is dismayed when seeing the guests.

“I thought we were doing a Zoom thing,” he says.

“We felt like it was a moment when people were ready to have a little bit of humor about the challenges in day-to-day life,” Snickers brand director Josh Olken tells Marketing Daily.”

“We tried to do it in a way that was hopefully respectful but also touched on the experiences that we all might be having right now,” Olken adds.

The spot is running across major networks including ABC, CBS, NBC and Fox as well as ESPN, Food Network, Comedy Central and TBS.

“It’s going to be out there pretty broadly,” he notes.