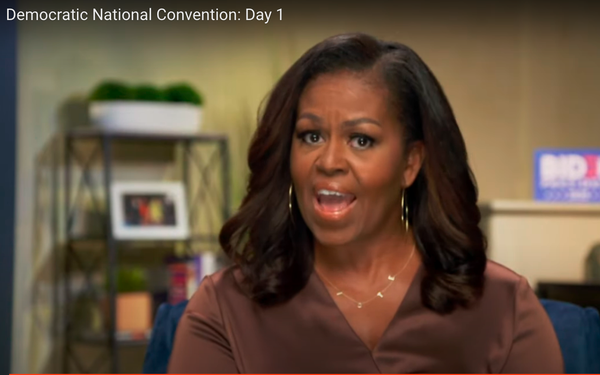 This week’s Democratic National Convention is noticeably different from past conventions, but also noticeably the same.

The differences lie chiefly in the event’s setting and production. It was supposed to be held last month in Milwaukee, but the live, in-person event was cancelled in favor of a gathering that is being tied together electronically via television and the Web.

The Republicans will also reportedly be putting on a convention next week made up mostly of speakers seen and heard from remote locations.

In a way, this summer's conventions are shaping up to be like the bizarre (and to many of us, irrelevant) pro sports events that are being played this summer with no spectators -- and thus, none of the noise and excitement that emanates from a stadium or arena audience when seen on television.

The Democratic Convention is not using an arena at all. Instead, speakers are seen giving their convention speeches from a variety of locations made safe (presumably) by social distancing.

But in all other ways, this summer's Democratic Convention is the same as all the others -- at least all of the others from recent history.

As before, the four-day convention is a lengthy infomercial for the Democrats (as the Republican Convention will be for the Republicans) -- with hours of time “donated” by the TV networks.

The four nights (plus many hours during the day as well) are being used, as always, to define the Democrats’ brand, version 2020.

To accomplish this, the party will trot out a litany of high-profile speakers each night. On Monday night, the scheduled speakers included Bernie Sanders, Amy Klobuchar and Michelle Obama.

John Kasich, ex-Republican governor of Ohio who once sought the Republican nomination for president, was also scheduled to speak.

The scheduled emcee for the evening was actress Eva Longoria, best known as one of ABC’s “Desperate Housewives” from so long ago. Perhaps Felicity Huffman was unavailable.

Over the next three nights -- Tuesday through Thursday -- the lineup is a who’s who of Democratic stars: Chuck Schumer, Bill Clinton, Nancy Pelosi, Barack Obama and others.

Kamala Harris is scheduled for Wednesday night, and Joe Biden for Thursday.

With little else of similar interest to watch on TV this month, and with little else to do, the Democrats’ four-day show this week should perform well in the ratings.

But at the same time, one assumes that the vast majority of that audience will be Democrats themselves, which means the Democrats will be preaching mostly to the choir.

The event and its choreography of sight and sound might even succeed at convincing those who tune in to watch that the Democrats are a united party in this campaign.

If little else, these every-four-year conventions -- both Democratic and Republican -- do a pretty good job of branding the parties and their candidates.

But even if they effectively unite their members who are already within the party, these conventions do little or nothing to unite the country.

This might be especially true this year as the Democrats this week and the Republicans next week put on respective shows lacking in the kind of noise and spectacle that, at the very least, in years past served to energize them.

This year, the political conventions -- like everything else in our lives -- are quieter and more subdued. Maybe they will be quietly effective too.

events, politics, television
1 comment about "Dems Kick Off 2 Weeks Of Subdued Conventions".
Check to receive email when comments are posted.
Next story loading