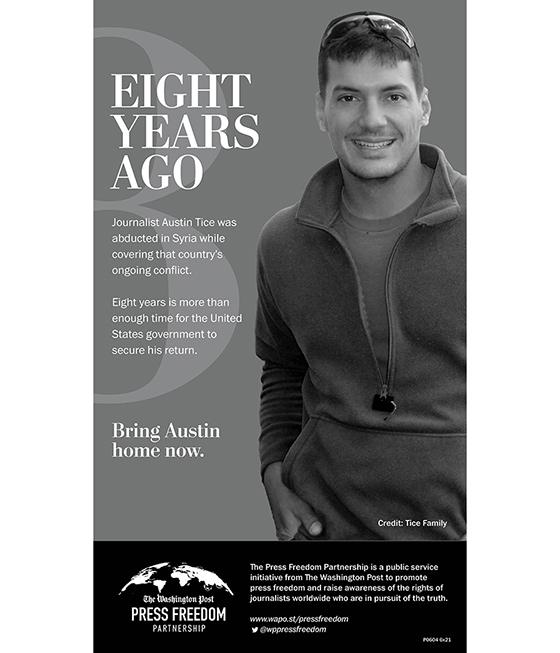 The Washington Post Press Freedom Partnership is launching an ongoing campaign around detained American freelance journalist Austin Tice. The campaign will run full-page ads in its print edition, with further digital ads running across other platforms until Tice is released.

Tice was abducted eight years ago today at a checkpoint in Syria.

At the time of his abduction, Tice was a law student at Georgetown University. As Fred Ryan, publisher-CEO of TheWashington Post notes in an op-ed published earlier this week, a 47-second video of Tice was released five weeks after his capture and since then information, has continued to suggest he is still alive.

The ads call for Tice’s release.

Ryan writes in his piece: “But there is one person who, by far, can exert the greatest influence in securing Austin’s freedom: the president of the United States. Throughout the Obama administration, efforts to bring Austin home proved unsuccessful. Since assuming office in 2017, President Trump has made welcome statements denouncing Austin’s detention and expressing hope that he will be released. So far, however, he has shown no greater ability than his predecessor to achieve progress in Austin’s case.”

He continues, “History shows that the only way to get U.S. hostages freed is the complete focus and commitment of the president himself. He must ensure that deputies throughout his administration make Austin’s release a top priority, and that they appreciate that sometimes, this involves interacting with unsavory characters and third-party intermediaries with their own agendas. It requires telling diplomats and officials to put standard operating procedures aside and to do the messy — but necessary — work involved in bringing captured Americans home.”

Ryan’s piece concludes, “Hostage releases can take a long time. But eight years is more than enough time for the U.S. government to secure Austin Tice’s return. Securing his release must be a top presidential priority.

More than a single young man is being held hostage: An entire nation is.”