Get Back To 'Normal' By Wearing A Mask, Mucinex Says 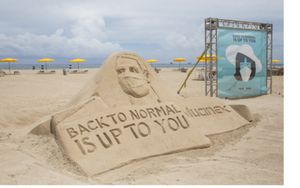 On the last days of what is World Mask Week, cold remedy brand Mucinex is unveiling a new campaign pleading for consumers to wear masks to guard against spreading COVID-19.

The effort includes interesting posters from artist Noma Bar that ask questions like “Miss coffee with friends?” In the center is stylized art of a woman wearing a mask that also seems to look like a coffee cup, or maybe vice versa. The graphic advises, “Back to Normal is Up to You.”

In addition, Mucinex hired artists in some Florida cities to create sand sculptures using Bar’s general design that have already been seen on some beaches, with more to come next week.

It’s the third phase of the brand’s public health information campaign that’s unfurled during the pandemic.

Earlier, Mucinex campaigns, also accompanied by an art element, had the slogans “Spread Facts--Not Fear” and “Be A Hero, Be Boring” to try to affect public awareness and sentiment. Whether those worked at keeping some people at home, or to investigate coronavirus “cure'' claims, for example, is hard to determine.

The sand artist displays were at the Lago Mar Beach & Resort Club in Ft.Lauderdale the week of Aug 10. Next week the sand sculpting and Mucinex display goes to St. Petersburg, and the week of Aug. 24 it will be in Jacksonville at the same time as the much-diminished Republican convention.

"Everything we do at Mucinex is informed by science and data, and as with our first two campaigns, we turn to art to deliver our fact-based messages," stated Claudine Patel, vice president of marketing for Mucinex. "With increasing evidence that face masks are some of the most powerful tools we have to slow the spread of the virus, Noma's art and these sand sculptures help spread the message that it's up to all of us to help fight this global health crisis together in order to get our lives and world back to normal."

Mucinex will distribute masks with Bar’s art at the Florida sites. To accompany the sand sculptures, Bar’s art will also be displayed on billboards and in public locations and featured on some Miami digital transit displays .

Many merchants and some cities have now imposed mandatory mask rules, but compliance is spotty and some employees and security officers say they’re fearful to force the issue.

According to a Gallup report in mid-July, 72% of Americans wear masks regularly, and some demographic groups (women, Northeasteners and Democrats) are more likely to often/always wear masks than others.

Republicans are the only demographic group measured in which more than half (54%) said they “sometimes-rarely-never” do.

“Although a broad majority of Americans are wearing masks in public at least very often, fewer are doing so all the time as recommended by the CDC and other health officials,” Gallup’s report stated. “Since April, a growing minority of U.S. adults  are eschewing mask usage.”