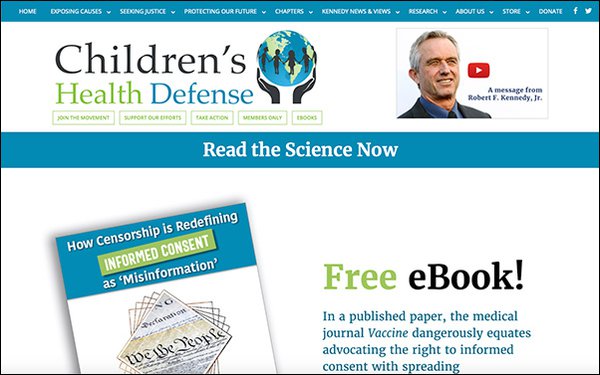 “At a time when the social media platform and its creator claim to be exponents of free expression and the scientific method for discovering truth, this case reveals the opposite: that they are indeed censors, and opponents of real science and open debate,” the Children's Health Defense alleges in a complaint filed Monday in federal court in San Francisco.

The lawsuit alleges that Facebook “collaborated” with the World Health Organization and Centers for Disease Control “to suppress vaccine safety speech with a 'warning label and other notices that appear to flag disinformation, but in reality censor valid and truthful speech, including speech critical of those agencies and their policies.”

The nonprofit Children's Health Defense, which denies being “anti-vaccine,” describes itself as advocating “for informed patient consent based on full disclosure of all relevant medical information.”

The organization contends that Facebook and its fact-checkers, including Poynter, treat Children's Health Defense posts in ways that create a “false and misleading appearance” that the organization violates Facebook's terms of service by publishing false information about vaccine safety, as well as the safety of 5G networks.

In May of 2019, Facebook deactivated the button that Children's Health Defense used to raise funds via Facebook, and also prevented the group's ad agency from purchasing online ads, according to the complaint.

The organization says it “has not posted any false information, promoted any false content, or violated any fundraising or other terms of service.”

The nonprofit's complaint gives several examples of times when its content was either blocked or flagged by Facebook.

Among others, on January 15, 2019, Facebook allegedly blocked a video of Kennedy discussing a pending lawsuit brought by his organization against the pharmaceutical company Merck.

The Children's Health Defense contends the warning label conveys to users that the information on its page is not reliable and up-to-date.

Among other claims, the group says its First Amendment rights are being violated by Facebook, and that Facebook is violating a federal false advertising law by placing a warning label on the posts.

Facebook and other tech companies have prevailed in numerous lawsuits accusing them of violating the First Amendment by “censoring” content. Judges have ruled in those matters that only the government -- and not private companies, like Facebook -- are bound by the First Amendment's restrictions on censorship.

“I don't see how social media companies win by fact-checking, by doing counter-speech,” he says. “Whoever they fact check, or put warning labels, on is going to sue them.”

Earlier this month, the company Maffick, which operates the social media pages “In the Now,” “Soapbox,” and “Waste-Ed,” sued Facebook for attaching a label reading “Russia state-controlled media” to its channels.