Virtual Dems, Night 2: From Sea To Shining Sea And Beyond 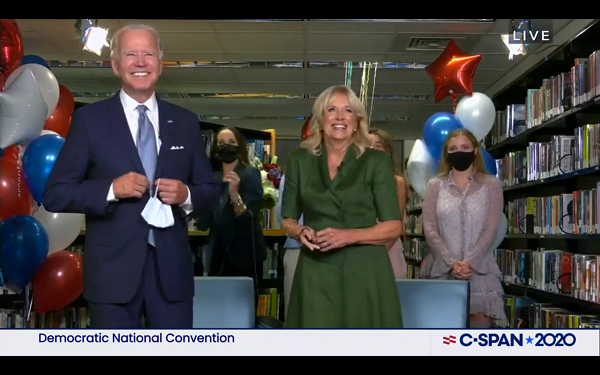 The best feature of Night 2 of the televised Democratic National Convention was the dominance of ordinary Americans over the usual parade of party all-stars.

The centerpiece of Tuesday night's installment of this year's unprecedented virtual DNC was the roll-call nomination of Joe Biden as the party's candidate.

This was styled as a cross-country travelogue (and more) in which Democrats from all walks of life were seen in mostly picturesque settings from all 50 states, plus seven other locales including territories such as Puerto Rico, Guam, American Samoa and the District of Columbia.

In each scene, the participants enthusiastically announced that they were nominating Joe Biden by pledging their state's (or territory's) elected Biden delegates to the candidate, ensuring that Biden's delegate count would outnumber the only other nominee in contention, Sen. Bernie Sanders.

This geographically wide-ranging roll-call production was great television. It ended with the scene pictured above, of Joe Biden accepting the nomination, with wife Jill and other family members nearby.

This was the kind of live event that TV technology handles best. Whoever choreographed this for the Democrats deserves an Emmy nomination.

The joy and pride of the diverse participants was infectious as they nominated a candidate they were evidently sincerely passionate about. And the settings in which they were seen were hugely attractive and visually appealing.

In election years past, the Tuesday roll-call nomination process was seen from inside crowded convention halls. By necessity, in the absence of a centralized convention, this year's roll call had to be done remotely. As luck would have it, this was a huge improvement.

Despite the attractive attributes of this lengthy, unique and inspiring showcase of the American spirit, CNN (which the TV Blog happened to be watching at the time) nevertheless decided to interrupt it in the middle for a long string of commercials.

It was as if CNN was saying: To heck with these ordinary Americans and this nominating process. We have to make some money.

For the record, the sponsors whose spots came during this lengthy commercial interval included T-Mobile, Prudential and the Trump campaign.

Later on Tuesday night and into the next day, the roll-call nomination sequence was lauded everywhere. CNN's decision to turn away from it was a mistake.

When it happened, I had the good sense to search for C-Span, which can always be relied upon to present events such as political conventions without adorning them with running commentary or interrupting them with commercials.

As always, I highly recommend choosing C-Span for the conventions this week and next over any of the news channels and broadcast networks.

With so much time given over to the roll-call nomination on Tuesday night, speeches by Democratic stars such as Sen. Chuck Schumer and former President Bill Clinton were kept mercifully short.

The evening ended with a speech by Joe Biden's wife, Jill, that ran only a few minutes past the 11 p.m. (Eastern time) hour. Ending on or close to schedule was also an attractive attribute of Tuesday's convention coverage.

This might not be the case on Wednesday night, as the Democratic Convention puts the emphasis back on some of its biggest names.

events, politics, television
1 comment about "Virtual Dems, Night 2: From Sea To Shining Sea And Beyond".
Check to receive email when comments are posted.
Next story loading