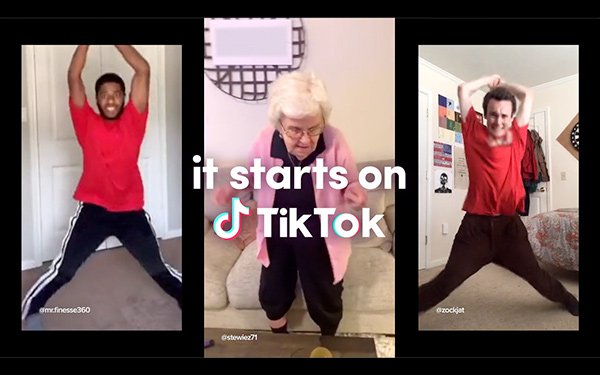 With Oracle, as well as Microsoft, now bidding to acquire some of TikTok's business, the social video app's future is more uncertain than ever.

Oracle is now in the hunt for TikTok’s U.S., Canadian, Australian and New Zealand assets, according to the Financial Times, following Microsoft's public acknowledgement of its pursuit of all or part of TikTok. In addition, The Wall Street Journal recently reported that Twitter had held preliminary talks about merging with TikTok.

Despite -- or perhaps because of -- that reality, the app maker has just launched its biggest marketing effort to date.

Beginning in the U.S. and then expanding worldwide, the new “It Starts on TikTok” campaign will span TV, social and digital media channels and out-of-home placements.

“The vision for ‘It Starts on TikTok’ is to celebrate the impact TikTok plays on every facet of culture, and to acknowledge the role of creators within the TikTok community,” a spokeswoman said Tuesday.

In the U.S., the spot is scheduled to run on Instagram and Twitter, along with NBC and ABC, ESPN and TNT, Hulu and Spotify, and iHeartMedia.

Exactly what ByteDance, TikTok’s Beijing-based parent company, is trying to achieve with the campaign is unclear.

Citing national security concerns, President Trump recently signed an executive order to prohibit U.S. citizens and companies from doing business with ByteDance, which is scheduled to go into effect on September 15. TikTok is reportedly preparing to sue the Trump administration in response to the looming U.S. ban.

Even if the campaign endears TikTok to more U.S. users and influencers, it’s unlikely to impact Trump’s decision.

It’s more likely that the campaign is intended to increase TikTok’s visibility and sticker price ahead of a likely sale.

Some ByteDance investors entertaining a possible takeover TikTok have already valued the app at around $50 billion, Reuters has reported.