Bud Light Seltzer Seeks Consumer To Be Its 'CMO' 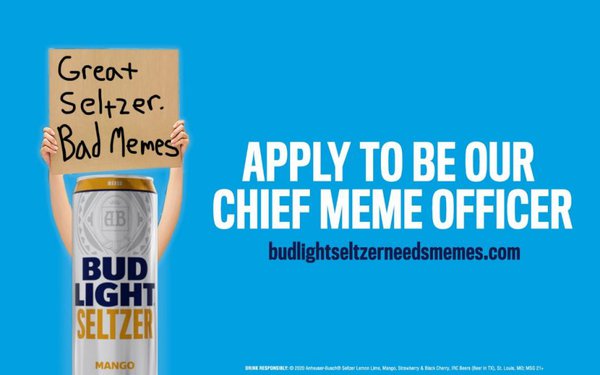 Anheuser-Busch’s Bud Light Seltzer is offering $5,000 a month, for three months, for its CMO to craft buzzworthy memes for the brand.

Applicants should know this: The bosses at Bud Light Seltzer can be mighty blunt, even in jest. Its tweet announcing the “job” reads, “We made a great-tasting hard seltzer but honestly our memes are terrible. Time to change that. Apply now to be our #ChiefMemeOfficer. It’s a real job with a salary. Tag someone who would be perfect for the position.”

The announcement reads, “The brand’s CMO responsibilities will include (first and foremost) enjoying Bud Light Seltzer and creating ten (10) viral memes and sharing them via social media.”

The brand made clear on Thursday it expects the person who fills the job to create 10 memes a week.

Andy Goeler, Bud Light’s vice president of marketing, announced the job opening on Instagram Tuesday, remarking, “We spent years working on a five-times filtered seltzer with 100 calories and four delicious flavors, but we somehow forgot to include the most important ingredient in any hard seltzer--memes.”

Bud Light Seltzer only debuted in January, and the company says it has already grabbed a 11% share of the market. A spokeswoman says it is the most instantly successful brand introduction in the history of Anheuser-Busch.

But it’s still far behind the dominant brand, White Claw, which took off in the last two years.

That brand’s success was boosted by potent user-generated memes, especially one in which comedian Trevor Wallace exclaims, “Ain’t no laws when you’re drinking Claws.”

That YouTube video collected nearly 5 million views and became the tagline for a zoo of White Claw memes and merchandise -- and then became pretty much what somebody in a group says when everybody’s drinking cans of it.

White Claw does very little paid advertising. But it’s become such a magnet for memes from fans that a New York Times story about the phenomenon last September was headlined, “The Memes Are Pouring the White Claw Down Your Throat!”

Back to the Bud Light call for CMO: Applicants can send as many memes as they want to be considered, or even a portfolio of their work. Everybody who applies also  is entered into a pool to win a three-month’s supply of Bud Light Seltzer.

Bud Light posted that it is proud of its product but, “we know a seltzer is only as good as its memes and, unfortunately, ours are trash. We need someone who can change that for us; someone who can pull out of the pits of cringe, someone who knows how to use the lasso thingy in Photoshop, someone like you. Please help us. Please.”