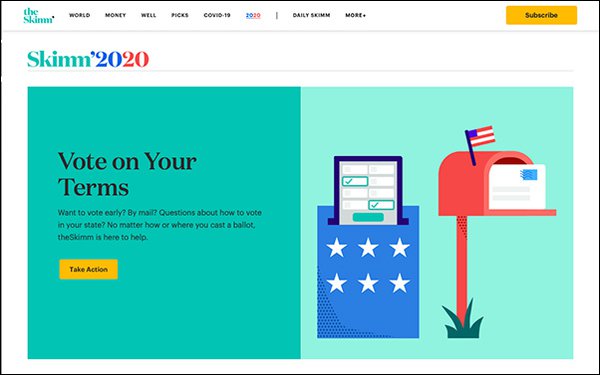 is kicking off "Skimm 2020," an initiative that provides millennial women with the information and tools to “cast their ballot with confidence," according to the email newsletter company.

The publication says the project is nonpartisan. It was launched on the 100th anniversary of the ratification of the 19th Amendment, which gave women the right to vote.

“In the middle of a global pandemic, there is so much confusion around the simple act of voting. We are fixing that," stated Carly Zakin and Danielle Weisberg, co-CEOs and cofounders of theSkimm.

Millions of millennials have relocated, due to COVID-19. Now, millennials are the nation’s largest living adult generation, according to theSkimm. Their voter turnout has been on the rise since 2014, especially among millennial women.

The focus for this year’s election is to help voters get registered, request an absentee ballot, navigate their state’s voting rules and get informed.

theSkimm has partnered with the nonprofit organization Rock the Vote to help its nearly 10 million members register to vote. It is also working with the U.S. Vote Foundation to provide state-specific tools around election dates, deadlines and other details about how to vote on Election Day.

It also teaming with additional nonpartisan organizations for voting resources, such as She Should Run, United States of Women, Power the Polls, Vote Early Day, When We All Vote, Civic Alliance, Vote.org, Vote Forward and National Voter Registration Day.

"Skimm 2020" content will be featured across platforms, including theSkimm.com, a weekly “2020 Tuesdays” section in the "Daily Skimm" newsletter and social channels.

The company's newsletters, which curate news for millennial women, have gained popularity since its founding in 2012.

A number of other publishers have launched projects to commemorate the passing of the 19th Amendment, as well.

The New York Times is celebrating the voices of those who fought for voting rights — and shining a light on those left out of history books — with a visual history project called “Suffrage at 100.”

Veronica Chambers, an editor at the Times, led the coverage.

“The rise of the movement coincided with the birth of photography, and the suffragists deployed the medium to put human faces on their struggle,” reads the introduction to the project.

It continues: “The fight for the vote was the fight for democracy. No history can sum it all up. But these images help bring into focus how the largest enfranchisement in American history came to pass, and the generations of women who made it happen.”