Streamers Still Watch Lots Of Linear... But 5% Of OTT Viewers Get No Linear Ads

What are viewers’ streaming habits looking like now that stay-at-home and reopening practices are all over the map, as opposed to the more consistent lockdowns of the spring months?

An analysis of July activity among 15 million U.S. smart-TV households within the TV audience data managed by Alphonso confirms that OTT viewers have far from abandoned linear.

The analysis tracks TV viewership using an index based on pre-pandemic weekly average for January/February 2020 as the baseline. 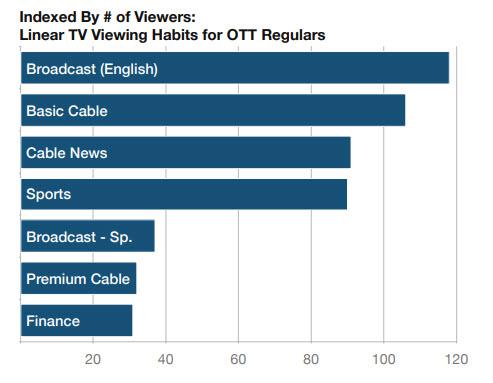 The data also show that, after bumps in March, April and May, if Netflix is stripped from the equation, viewership of original/exclusive programming on streaming services returned to pre-COVID levels by July: 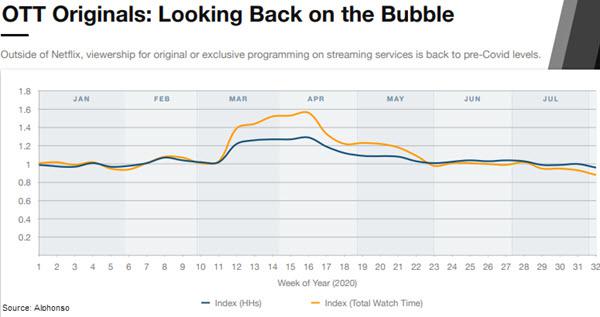 Just 15% of OTT viewers were found to regularly watch more than one OTT service other than Netflix. (Amazon Prime Video and Hulu are the most popular combination so far this summer, followed by Hulu and Disney+.)

However, the analysis also shows that 5% of OTT viewers get no linear ads at all."

"Our study focused on viewers who are consistently -- three times a week at minimum -- consuming original or exclusive OTT programming," says Raghu Kodige, Alphonso's chief product officer and co-founder. "Our data suggest that 5% of them are watching these services exclusively and thus not seeing any ads at all."

Further, as many as 18% of OTT viewers didn’t see ads from many of the top spenders in July.

"We looked at several big linear TV spenders to see what percentage of our OTT audience had seen those brands' ads on linear," explains Kodige. "Pepsi was one of many brands where 18% or less of this OTT-centric audience had not seen any of their linear TV ads. Colgate was at 15%, and Geico  at 12%, for instance. The list goes on."

Conclusion: Brands seeking mass-market reach will not engage some audiences unless they're also placing ads on ad-supported OTT services, or via TV-to-digital retargeting.

Separately, an Alphonso webinar this week also featured results of an online survey focused on streaming conducted August 7-10 by the Survata Digital Network among a 1,031 sample representative of the U.S. population.

One notable finding: Although most consumers confirm that they’re watching more TV, 54% say their consumption of ad-supported content hasn’t changed during the pandemic, versus only 16% saying it’s increased, and another 8% saying it’s decreased:

Note that among those who are watching more ad-supported content, only 15% said the reason is that they can’t afford paid subscriptions anymore. Rather, they tend to cite watching more TV in general, having more viewing time, and trying free or discounted streaming services.

More than two-thirds of respondents indicated a preference for a subscription service that charges a lower fee in return for showing a limited number of ads, versus a service charging a higher fee for no ads. (In another question, just 7% said they tend to pay more money so that they can avoid ads.)

And among those who’ve tried limited-ad services, half say they’re satisfied with or neutral about the number of ads, and the other half are dissatisfied:

Only 21% reported feeling that the ads they see on streaming services feel targeted to them, and 27% disagreed with that statement.

On the other hand, despite widespread reports that consumers are unhappy with the difficulty of discovering content on streaming services, 52% of this sample agreed that it’s easy to discover new content they want to watch on streamers, versus just 37% saying the same about traditional TV/cable.