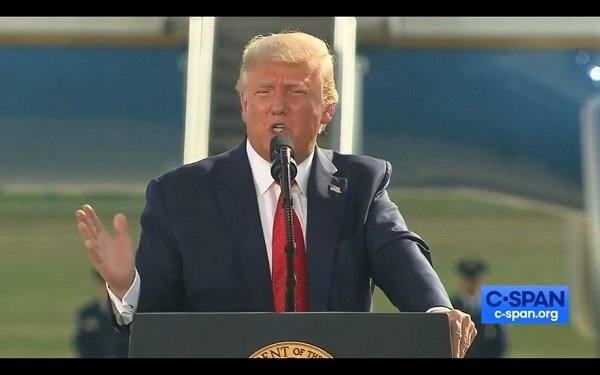 What is the Trump brand?

The Republicans will attempt to answer that question this week as their own virtual convention starts Monday and runs through Thursday night.

It will be seen each evening in prime time on the usual cable news channels and streamed on myriad web platforms. As always, the TV Blog advises watching it on C-Span, which is the only spin-free zone in the TV universe.

Like the Democratic Convention last week, the Republican Convention will be staged virtually, with none of the inside-the-arena hoopla of past conventions due, of course, to COVID-19 restrictions and precautions.

By the end of the four-day virtual Republican Convention later this week, we should know what the Trump brand is -- or more to the point, how the GOP is positioning the president and his running mate for reelection this fall.

After the four-day Democratic Convention last week, we knew what the Biden brand is. According to the portrayal that emerged over the four days, Joe Biden is an experienced government legislator and administrator who is well-regarded both nationally and internationally.

He comes from working-class, Irish-American Catholic stock. He is a devoted family man (according to the testimony last Thursday of four of his granddaughters who appeared during the convention coverage on TV).

He is resilient in the face of personal tragedy, and sensitive to the needs of middle- and lower-income Americans. He is an all-around nice guy who makes time to befriend many of the ordinary people he meets.

In all ways -- and this was perhaps the most important point the Democrats wanted to get across last week -- Joe Biden is the opposite of Donald Trump, the incumbent who Biden and the Democrats wish to unseat and make a one-term president.

All of this may be true, at least to a degree. But the important thing is that last week’s four-day Democratic Convention was very successful in establishing this portrait of the party’s candidate.

If there were any undecided voters watching the festivities, the four-day show may have converted them into decided voters -- in favor of Biden. The convention seen last week was that effective.

This week, the GOP faces the same challenge -- namely, how to make their candidate appealing (i.e., likable), not only to undecided voters who may be watching (if any), but to voters who supported Trump four years ago but are not now feeling the love for him that they felt back then.

On the issue of warmth and likability, the GOP would appear to face a more difficult challenge than the Democrats.

Whether one likes Joe Biden or not, one thing most people can agree on is that the man is not abrasive or controversial.

Donald Trump is both of those things. In fact, to many who supported him in 2016, these were his most endearing traits.

Back then, Trump was the most skillful of all the candidates in either party at using the medium of television to trash and thrash his opponents.

Here in 2020, however, the unique features of our national life have made it impossible for Trump to apply that same skill in his reelection campaign.

Four years ago, he made his bones in the near-constant live appearances he made in arenas across the country where, by all appearances, he electrified tens of thousands with his promises to reshape the way entrenched elites in Washington handled the nation's business.

He also trounced the other Republican hopefuls in the numerous televised debates that were staged in the months leading up to his nomination.

His performances on the debate stages succeeded in eliminating his foes one by one, as if his campaign was a political reality show like “Survivor” or “The Apprentice.”

This year, due to the COVID-19 pandemic restrictions on large gatherings, Donald Trump is left to campaign without his best tools -- public appearances and in-person debates with his opponent.

This week's convention emerges as a rare opportunity for him to try and reignite the excitement that followed him wherever he went in 2016. But will this four-day virtual event be enough to light a fire under his campaign?