Case Study: The Method Is The Message 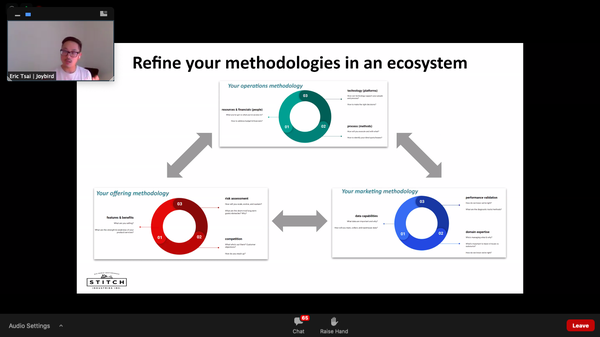 Eric Tsai, VP, Marketing and Analytics at Joybird (inset), which sells mid-century modern furniture, gave a presentation on methodology at Tuesday's Data & Programmatic Insider Summit, first describing it as the way to match reality with what you see on paper.

Data-driven marketing is a scientific method that aligns methods to one's business rules. Whether to build or buy technology is a decision that is tied to the ecosystem, he said, as well as resource management. Promotions and discounts are tactics within your offering, while the media cost is actually just one sub variable within your marketing tactics.

In identifying leverage, Tsai recommended looking at the strengths versus the weaknesses within your ecosystem and asking whether you are going after mass or niche.

Joybird, which was bootstrapped five years ago and purchased by La-Z-Boy last year, started by executing mostly a traditional approach due to operations and marketing constraints. "We shifted more media to programmatic, but our offering created challenges to scale due to resource limitations and a long sale cycle which requires much longer attribution window and better tracking technology," he said.

"We decided to leverage Facebook as a primary test platform in parallel with building our own audience development capabilities. We didn't like the lack of transparency within Facebook but we were getting results, so we integrated the results to reverse-support our own KPIs."

Tsai said the company decided to identify what Facebook does well. Then it integrated multiple algorithms to drive real-time learning by combining media algorithms. Their website sends behavioral data back to Facebook. The latter's upcoming Conversion API will safeguard data-driven marketing, he said.