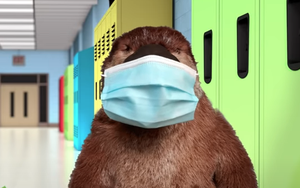 Who better to inform kids of new back-to-school standards like hand washing, social distancing and wearing face masks than Lunchables’ Platy the Platypus and Jackie the Jackalope?

The Kraft Heinz food/snack brand is taking a playful and educational approach to the school season with a campaign titled “New School Rules” that stars those zany animated characters.

It’s a departure for Lunchables, which has typically focused back-to-school marketing efforts on in-store promotions, according to Lunchables marketing director Rachel Drof. Its core user group is kids aged 6-12.

“There’s a lot of uncertainty and a lot of anxiety that is happening for parents as well as our kids,” Drof tells Marketing Daily.  “With that background, we challenged ourselves to say what role can we play, how can we help.”

That help comes in several forms.

Three campaign spots produced by dentsumcgarrybowen begin with Platy announcing, “Whenever school happens, these are the new school rules.”

When informed in one spot about six-foot social distancing by Jackie, Platy struggles to figure out how that translates to “webbed feet.”

In another spot, both characters sing the “happy birthday” song while washing their hands for 20 seconds. In the third, it takes Jackie three silly attempts before donning the appropriate face mask.

“We’re trying to make the new rules feel approachable and fun for kids,” says Drof. “But there’s obviously a secondary message that helps reassure parents by teaching kids that things like wearing a mask, washing hands and staying distant are something that are fun and that they can do.”

Another element of the campaign is a “choose your own adventure hotline” at 1-877-BTS-RULZ. After being greeted by Platy and Jackie, callers might be told to dial 1 to attend a music class or 2 for art instruction.

“It’s a parent/kid moment together. It also throws in jokes, riddles and fun little tidbits for them to engage and have a smile as they work their way through the different options,” says Drof.

Lunchables is partnering with Totally Kidz for a face mask-coloring contest, among other activities. The brand also has a CPG exclusive for the last two weeks of August on PopJam, with content that reinforces the need for safe distancing, hand washing and wearing masks.