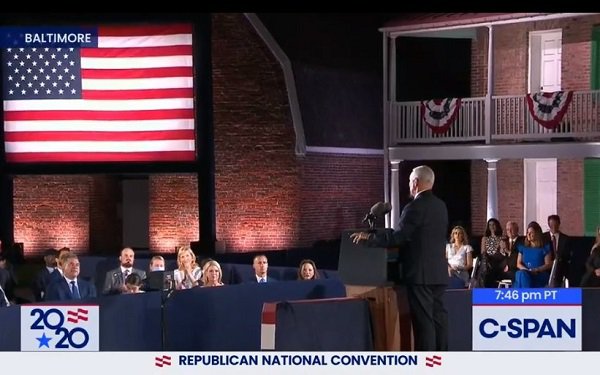 By the third night of this week’s virtual televised GOP convention, it was reasonable to question the necessity of the event’s four-day length.

In sync with the first two nights on Monday and Tuesday, Wednesday night’s marathon of speeches -- delivered mostly without live audiences -- ran for approximately three hours.

Some were stand-out speakers and some were not. But they were all there to press points that had already been discussed repeatedly in the two previous days of virtual GOP speechmaking.

If repetition is one of the foundational principles or tools of effective advertising, then the third night of this week’s four-day GOP show fell into that category. And to be fair, so did last week’s Night 3 of the virtual Democratic Convention too.

Among the topics and issues that were reemphasized by the Wednesday night lineup of speakers were media bias, support for law enforcement, the chaos in American cities this summer (with this week’s riots in Kenosha, Wisconsin, serving as a timely backdrop), the Democrats’ support of abortion, school choice, the plight of veterans (and how President Trump has helped them) and other subjects.

As they had on previous nights, in a bid for women voters, multiple speakers emphasized how many women Donald Trump has hired for key positions in his administration and, previously, in his company.

Also, as on previous nights, a handful of African-American speakers came on to endorse Trump, and decry Joe Biden’s statement -- which he made in May in an interview with an African-American radio host -- that African-Americans who don’t support him “ain’t black.” (Specifically, the quote was: “Well, I tell you what, if you have a problem figuring out whether you’re for me or Trump, then you ain’t black.”)

Among the best speakers in this category was Clarence Henderson, a veteran civil rights activist and participant in a famous lunch counter sit-in in 1960 in Greensboro, N.C., who delivered his remarks from the site of that sit-in.

Another was Jack Brewer, former NFL safety and born-again Christian from Grapevine, Texas, who asked: “Are you going to let the media lie to you?”

Other speakers who made a dramatic impression included a nun, Sister Deirdre Byrne MD -- a medical doctor and former Army colonel who gave a ringing endorsement of Trump; and Chen Guangcheng, a blind human rights activist from China.

As if an endorsement from a doctor nun who is also a former colonel in the U.S. Army was not enough, viewers also got to hear legendary Notre Dame football coach Lou Holtz endorse Trump too.

The theme of Joe Biden’s America vs. Donald Trump’s continued to be hammered home in the evening’s main event -- Vice President Mike Pence’s nomination acceptance speech delivered before a small live audience within the confines of historic Fort McHenry in Baltimore Harbor, where Francis Scott Key was inspired to write “The Star-Spangled Banner” in 1814.

“You won’t be safe in Joe Biden’s America,” Pence said at one point in an eight-word sentence that seemed to sum up the main message the Republicans wished to impart on Wednesday night -- and all week, for that matter.

After his speech was over Pence and wife Karen were joined by President Trump and First Lady Melania, setting the stage for Thursday night’s final episode of this week’s virtual GOP convention miniseries.