The Mother Of All Tuckers: How Shocked Are We That The Fox News Host Defends Armed Vigilantism? 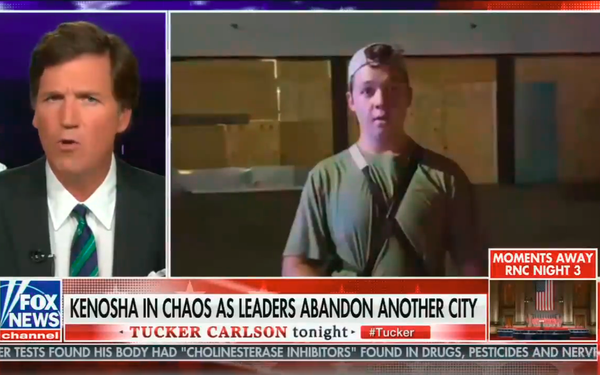 "How shocked are we that 17-year-olds with rifles decided they had to maintain order when no one else would?," Fox News prime-time host Tucker Carlson broadcast Wednesday in defense of the teenage vigilante who appeared to shoot and kill two protesters during the mayhem that engulfed Kenosha, Wisconsin following public outrage of yet another police shooting of an unarmed Black man caught on camera.

The incident comes one year after a push to boycott and fire Carlson, following his August 2019 commentary that White Supremacy is a "hoax," and I for one have to ask -- what is the incendiary line Fox News won't let its hosts step over?

Reactions to the vigilantism -- especially the Kenosha police's kid-glove handling of the White youth shooter -- seemed to subsume the other big story of the news cycle, the third night of the Republican National Convention, which featured a keynote by Vice President Mike Pence focusing heavily on "law and order," and asserting that it is "on the ballot" this presidential election.

"But so are things far more fundamental and foundational to our country," he concluded, without spelling out exactly what they are.

The vigilante's killings come as the perfect backdrop for the RNC, which earlier this week gave a prime-time slot to the "suburban" couple who pointed loaded weapons at peaceful protesters marching past their home in St. Louis in June.

Not since the DNC's 1968 convention in Chicago broke out in riots has a national convention represented so much violent social unrest in America, and the irony is that the incumbent President, his campaign, and the convention speakers have done nothing but imply it is exactly the kind of unrest and lawlessness that America would face if it elects Joe Biden and Kamala Harris in November.

But the violent unrest is what is happening under the incumbents' watch, and if anything, they are working hard to exacerbate it, not quell it.

Pence ironically wrapped up his speech Wednesday night by asserting that if America reelects him and the President for another four years, "we will make American great again, again."