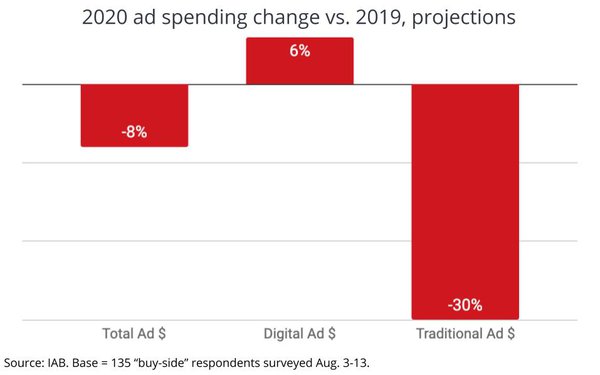 U.S. ad spending is now expected to decline 8% vs. 2019, according to a survey of "buy-side" executives at advertisers and agencies surveyed by the Interactive Advertising Bureau in recent weeks. The study also shows that "digital" ad spending will actually expand 6% this year, while "traditional" media advertising will decline 30%, indicating digital's market share is growing as a result of the pandemic.

The "2020-21 Covid Impact On Advertising" report being released this morning by the IAB, is based on the trade advertising bureau's sixth survey of the buy- and sell-sides of the business.

The IAB's analysis shows the migration of ad budgets from "traditional" to "digital" formats across a variety of media, including TV, radio, "print," and out-of-home media, too (see below).