What If Americans Are Just Sick-And-Tired Of You-Know-Who? 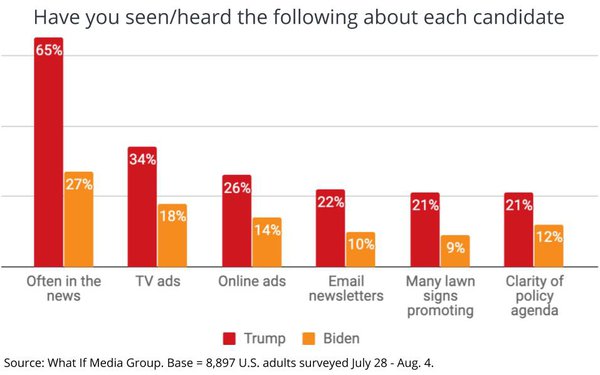 One of my favorite -- and the weirdest -- Marvel Comics series is its "What If" comic books, which pose fantasy scenarios and outcomes involving improbable match-ups of their characters. My favorite one poses the question: "What if Captain America had been elected President?"

I won't spoil it for those who haven't read it, but I was reminded about it by a pitch a received this week from a performance marketing company called "What If Media" that poses a scenario for the 2020 Presidential election that also seems like a fantasy to me: That the incumbent President will be reelected because he has a much higher recognition among Americans than Democratic challenger Joe Biden.

So here's my fantasy scenario and outcome: That instead of being an asset for getting reelected, the omnipresent nature of the President is his greatest liability. In other words, "What If Voters Got Sick-And-Tired Of Seeing You-Know-Who?"

Don't get me wrong -- I'm doing my part. It's been two years since I published his name under my byline, which may seem like a small gesture, given what What If Media's survey shows, but it's the least I could do.

According to its poll of American adults, the Republican incumbent leads his Democratic challenger by margins greater than two-to-one in all the major awareness media What If asked them about.

Honestly, this should not be surprising, given the normal volume of news and awareness and incumbent President generates organically, and when you add how abnormal his incumbent is vis a vis his acerbic, outrageous, divisive, disgusting, un-American rhetoric, I'm posing my what-if scenario that Americans are done listening to him.

Or as Ralph Kramden put it best in yet another what-if YouTube video mashup of what would happen if he met the President: "You are a blabbermouth." (See video below.)

My what if scenario, of course, runs counter to the Madison Avenue ad age "say whatever you want, just spell my name right," but we've also never had to deal with an individual who says whatever he wants over and over and over again.

In my what if scenario, most Americans are over him and simply want to move on to someone normal.

performance marketing, politics
4 comments about "What If Americans Are Just Sick-And-Tired Of You-Know-Who?".
Check to receive email when comments are posted.
Read more comments >
Next story loading