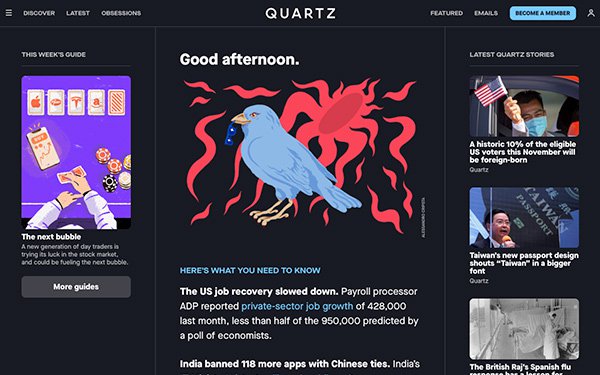 Business digital publisher Quartz surpassed 21,000 subscribers this summer, nearly doubling its subscriber base in less than a year.

In March and April, subscription growth rate at Quartz was up by nearly a quarter year-on-year, according to The Drum, which first reported the news.

Katie Weber, president of Quartz, told the publication that focusing on its "Need to Know" COVID-19 email newsletter helped attract subscribers, as well as reporting on topics such as the office, mental health and commuting.

Quartz also expanded its membership offering, with access to all digital content, member-only newsletters, deep dives, digital events and presentations. A subscription costs $14.99 a month, or $99.99 a year, after a 14-day free trial.

Quartz put up a metered paywall in 2018, after it was acquired by Uzabase from Atlantic Media.

In July, the publisher launched a new, feed-style homepage, drawing inspiration from Quartz’s popular email newsletters, such as the “Quartz Daily Brief” and “Quartz Weekly Obsession.”

In May, the company let go of 40% of its staff, or about 80 people. Uzabase said at the time that ad revenue had declined by 54% during the first quarter of 2020, due to the effects of the global pandemic.

Editorial staff was reduced from 85 positions to 50.