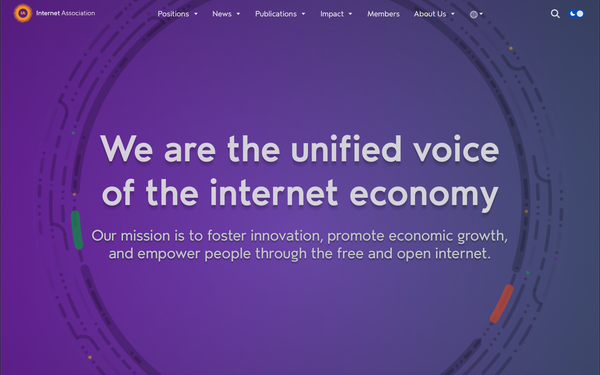 The group's comments come in response to the National Telecommunications and Information Association's petition to the FCC for regulations that would tie web companies' legal protections for users' speech to the companies' content moderation policies.

The NTIA filed its petition two months after President Trump accused social media companies of engaging in “selective censorship” based on political viewpoint. He made the claim after Twitter alerted users to dubious statements in two of his tweets.

The FCC sought comments on the petition earlier this summer. So far, a wide range of groups have weighed in. Digital rights organizations, including the Center for Democracy & Technology, have opposed the administration's request, as has online video company Vimeo.

Others, including telecom giant AT&T, are supporting the White House's effort to clamp down on social media.

Three of the five current FCC members -- Jessica Rosenworcel, Geoffrey Starks and Michael O'Rielly -- have either said or hinted they don't believe the agency can craft regulations regarding content moderation policies.

The Internet Association, like other groups that oppose the administration's petition, argues that the FCC lacks authority to craft rules interpreting Section 230.

“The FCC can only act pursuant to authority delegated by Congress, not at the direction of the executive branch,” the Internet Association writes in its 72-page comments. “Because Congress has delegated no such authority to the FCC, NTIA’s proposed revisions to Section 230’s implementation cannot be acted upon by the FCC.”

The organization also argues that rules about content moderation would violate websites' First Amendment rights to determine what type of content to publish.

“The First Amendment protects the rights of the providers themselves,” the lobbying group writes. “When providers determine what kind of platform to be and what kinds of content to host or prohibit, those are forms of free expression protected by the First Amendment. It is bedrock First Amendment doctrine that such editorial decision-making is constitutionally protected.”

The Internet Association adds that FCC's prior attempts to enforce a “fairness doctrine” on broadcasters highlights problems with attempting to regulate social media companies' curation policies. The fairness doctrine -- which was repealed in the 1980s -- required broadcasters to make efforts to air both sides of controversial topics.

“The doctrine injected the Commission into the editorial decision-making process in ways that proved both chilling to speech and unadministrable,” the group writes.

“In practice, the Commission was forced to scrutinize program content and duration on a case-by-case, minute-by-minute basis to ensure that broadcasters provided a 'reasonable opportunity' to respond to controversial issues,” the Internet Association adds. “The FCC is no better suited to regulations for Section 230 and online content moderators.”