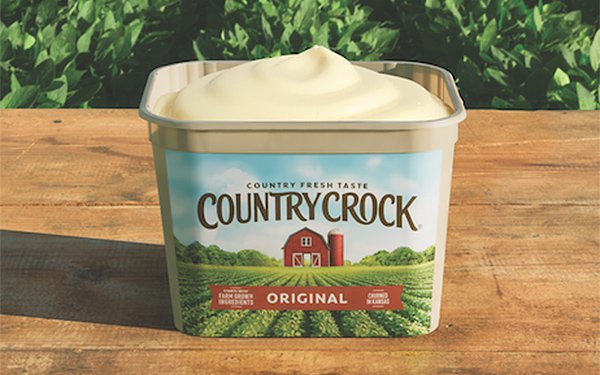 Buttery spreads brand Country Crock is modernizing its nostalgic roots by doubling down on all things country.
A new campaign from Ogilvy introduces redesigned Country Crock packaging, while touting the brand’s Kansas roots and modern-day presence under the banner Country Crock—Bring The Country In.

“We’ve been on this journey since early 2019,” brand director Marisa Kololyan tells Marketing Daily. “It’s a brand with a lot of nostalgia. People grew up with it on the table. But as the world kind of moved on, Country Crock got left a little bit behind.”

The company chose to conduct research in the Atlanta market because that’s where it indexes high for purchase. It is “the heart of where our loyal consumer really lives.”

User feedback helped guide an upgrade to packaging with “lighter, more realistic imagery,” including the brand’s iconic barn, whose doors are now wide open. “That was how our loyal consumers wanted to see the brand. They wanted it to be in an
open, airy countryside with doors open to everyone.”

A 30-second campaign spot makes an immediate connection between Kansas — the “middle of the country” — and “the middle of your table,” a reference to the brand’s preferred position at breakfast, lunch and dinner.

“All of our products are made in Johnson County, Kansas, which is something nobody knew,” says Kololyan. “So this is the first time we’re telling consumers, establishing our roots in Kansas and our sense of place as a brand.”

Asked about other potential country connections, Kololyan says country music “can be huge cultural tent pole for us. So there is a big program in the works.”

The new commercial is running on more than a dozen major linear television networks and during programs such as “Chopped” on Food Network and NBC’s “Today.” Ads on social media are targeted to people looking for recipes and other cooking content.