How Ted Cruz's Dad Ended A Presidency (No, Not That One) 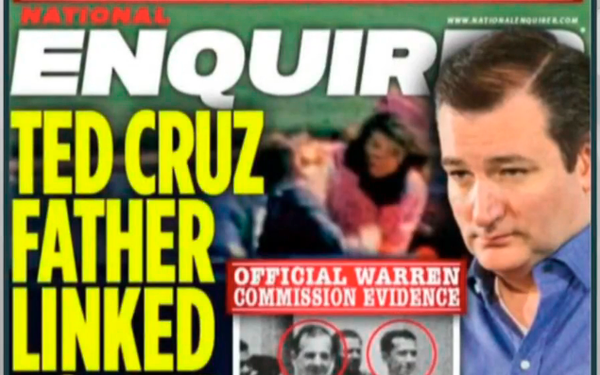 For a presidency that began with the clandestine weaponization of digital media, it’s fitting, and maybe a bit ironic, that it is ending with light shed by the most traditional media: good, old-fashioned gumshoe reporting, books, and yes, even a tape recorder.

But among the many damaging revelations to come out of this week’s cascade of analog exposes is one from the President’s former personal attorney Michael Cohen’s book Disloyal, which alleges how his client -- then a Republican candidate -- dispatched his opponents with the help of sensationalized hit jobs published by another analog medium, The National Enquirer.

The relationship between the candidate, the Enquirer and its publisher, former American Media CEO David Pecker, has already been well-documented -- including its catch-and-release role in squashing tawdry actual stories that would have damaged his Presidential bid. (One of those led to the conviction of Cohen on the violation of U.S. campaign finance laws, although his co-conspirator “Individual 1,” was never indicted.

That’s okay, because the revelations in Cohen’s book may help settle matters, especially the fact that the candidate weaponized one of the largest-circulation tabloid magazines to spread disinformation attacking his opposition in order for him to grab the Republican nomination.

“As each candidate was moving up [in the polls], let’s say Marco Rubio, David Pecker would reach out to me and he would give me a list of things that he was intending to do in order to squash Ted Cruz’s or Marco Rubio’s rise. Whoever was rising in the poll. That was who became the person we needed to knock out of the race,” Cohen alleged during an interview previewing his book with MSNBC’s Rachel Maddow.

“With Marco Rubio, you may remember, there were photos of him in a swimming pool, he had a drug problem, and all sorts of other -- we will call them ‘salacious rumors’ -- and every time they would be provided to me by David Pecker, I would immediately take them into Mr. Trump’s office,” Cohen continued, adding: "We would sit down. We would talk about it. He would approve it. Then I would contact David. Next thing you know, two days later, on the front cover, Marco Rubio has a drug problem."

"That is a remarkable campaign contribution to the Donald Trump for President campaign," Maddow remarked, before Cohen went on to assert that there are other news media outlets today that "have become state-run television, as well as newspapers. That if Donald Trump sneezes, it’s the greatest sneeze in the history of the world… front page news story… breaking news."

Cohen’s assessment that his former boss’s leap from using a tabloid like The National Enquirer as a weapon against his opponents to one where he is using national network TV news and major national newspapers that way shouldn’t be surprising, but the level of collaboration and coordination between them should be.

In fact, Fox News Channel prime-time host Sean Hannity has come under fire once again shilling for the President’s campaign, after the campaign sent a fund-raising email offering signed copies of his new book in exchange for campaign donations, which is a violation of Fox News’ publicly stated policy prohibiting its hosts from participating in political campaigns.

But Cohen’s depiction of the then-candidate micro-managing how The National Enquirer fabricated hit jobs on his opponent -- especially one cover story alleging that Ted Cruz’s dad, Rafael Cruz, played a role in assassinating President John F. Kennedy -- demonstrates the incestuous, and insidious, nature between his boss and the media that collaborated with him.

The candidate cited the tabloid hit job that he personally orchestrated repeatedly on Fox News, as well as during the Republican presidential debates.

To be sure, there are far worse revelations about the candidate/President that have come to light because of the books being released this week and last, especially Bob Woodward’s Rage, which The Washington Post journalist is releasing along with indelible tape recordings from 18 one-on-one interviews the President gave to him, so you can hear it in his own words, making it difficult for him to dismiss it as “fake news.”

It’s fitting that analog media like books and newspapers may be the undoing of this Presidency, given the way Russia and Cambridge Analytica utilized sophisticated, illicit methods to turn our own digital media into a weapon against us.

And most ironic of all, that the same medium that brought down President Richard Nixon -- a tape recorder -- is the one that may play a role ending this presidency.

books, fake news, media, news, newspapers, politics, television
11 comments about "How Ted Cruz's Dad Ended A Presidency (No, Not That One)".
Check to receive email when comments are posted.
Read more comments >
Next story loading