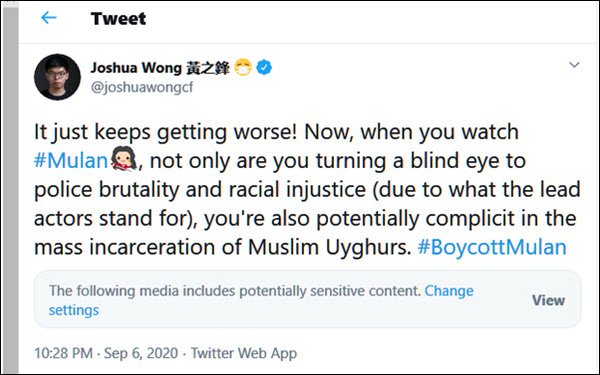 Disney’s “Mulan” was watched by 1.12 million U.S. households and earned at least $33.5 million from $30 on-demand viewing fees on Disney+ in its debut over Labor Day weekend, per Samba TV estimates.

But the movie is now facing increasing blowback on social media, and so-far-disappointing advance ticket sales in the massive China market.

The social media controversy stems from the revival of a year-old call to boycott the movie, which began when its star, Liu Yifei, posted her support of Hong Kong police on the Chinese social media platform Weibo during pro-Democracy protests in the city last August.

The "#BoycottMulan" hashtag began trending again on Twitter in the week prior to the movie’s release, and has now been fueled by credits at the movie’s end that thank government entities in China’s Xinjiang region, where parts of the movie were filmed.

According to the United Nations, more than 1 million Chinese Uighur Muslims are being held in government internment camps in the region, where the U.S. State Department has documented frequent abuse and torture, and some deaths. The Chinese government has sought to position these as “reeducation” camps.

Among those criticizing the movie is Joshua Wong, a Hong Kong activist who argues that both the star’s comments and the movie’s use of the Xinjiang region for filming are reasons for a boycott, noted CBS News. (CBS said it had reached out to Disney about its September 9 report on the #BoycottMulan” controversy, and was awaiting a response.)

"It just keeps getting worse!,” Wong tweeted on September 6 (above). “Now, when you watch #Mulan, not only are you turning a blind eye to police brutality and racial injustice (due to what the lead actors stand for), you're also potentially complicit in the mass incarceration of Muslim Uyghurs."

Google searches for #BoycottMulan jumped 1,900% between Sept. 4 -- the film’s release date -- and Sept. 5, according to SEMrush data cited by Business Insider India.

Between Sept. 1 and Sept. 9, SEMrush tallied 19,236 tweets about the movie. Nearly 44% expressed negative sentiments (including use of #BoycottMulan and other negative words, like “terrible”), versus 40% positive and 16% neutral sentiments. The company uses machine-learning models to identify sentiment tones.

Box Office Mojo estimated that the movie made about $6 million during its opening weekend in international markets where theaters are open.

“Mulan” is set to open in China this weekend. Before the COVID pandemic hit, Disney reportedly expected the movie to be a big hit in China.

But the South China Morning Post reported that, according to China’s largest film ticketing app, Maoyan, as of Wednesday morning, advance ticket sales for the movie’s opening day (Sept. 11) were about 2.1 million yuan (US$307,000) after one day of presale. Maoyan estimated the movie’s eventual opening-day box office at about 2.3 million yuan.

According to the Maoyan numbers cited in the report, two recent hit movies in China -- “Love You Forever” and “The Eight Hundred” -- generated 140 million yuan and 27 million yuan, respectively, in advance ticket sales.

"Mulan" "has been “swamped with bad press and poor reviews from Chinese audiences who have watched the movie online overseas, or a pirated version online,” the media outlet writes.

"The film currently scores 4.7 out of 10 on the rating site Douban," it continues. "They accuse the film of being bland and mishandling Chinese culture," and boycott calls increased after the credits revealed that some scenes were filmed in Xinjiang.

#BoycottMulan had already been trending in Hong Kong, Thailand and Taiwan since Yifei’s controversial post, according to the report.