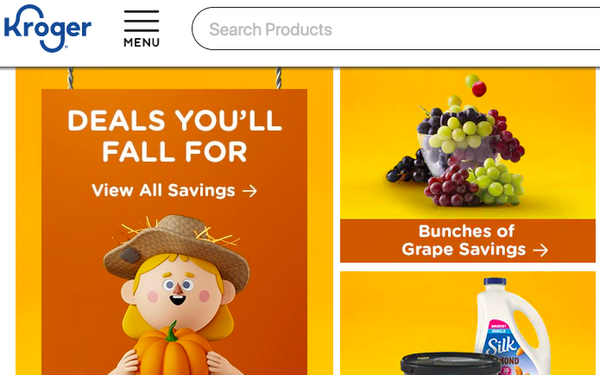 Digital sales rose 127% at The Kroger Co. in its recently ended second quarter, with contactless store pickup and delivery available to 98% of the grocery retailer’s customers.

Following a 92% rise in the first quarter, digital ordering remains a tiny fraction of Kroger’s sales. But it has provided a means of staying connected with customers whose shopping habits have shifted as a result of the pandemic.

Digital orders also provide data insights about shoppers that Kroger uses to sell ads on its websites and mobile apps—the fruits of investments in digital technology the company began about five years ago.

“Many of our customers are ordering groceries online for the first time as a result of COVID-19, and the majority of them tell us they plan to continue to do so in the future,” chairman and CEO Rodney McMullen told financial analysts last week.

“As a result of the pandemic, we continue to see a slow return to normal from the shutdown period resulting in fewer customer visits, but increased basket size.”

An analysis of eight grocery retailers released this week by foot-traffic data provider Placer.ai puts Kroger in the upper ranks of those whose monthly store visits have rebounded.

After declining 14.1% year-over-year in April, the number of Kroger monthly visits was up 1.8% in August—second only to Albertson’s (+9.6%). Sprouts Farmers Market, Wegmans and Whole Foods Market were still in negative territory—down 5.5%, 1.6% and 22.5%, respectively.

Asked by Wolfe Research analyst Spencer Hanus about the timing of a “normalization” of store traffic and purchases, McMullen said, “it’s kind of fascinating. As you look at markets where COVID incident rates are lower or less severe, what we find are people start visiting the store more often, but they don't spend as much.”

Barclays analyst Karen Short estimated digital ordering to be about 7% of Kroger sales. In response, McMullen said it’s “a little bit higher than your estimate.”

In 2015, Kroger acquired the data analytics company Dunnhumby USA to begin building its in-house digital capabilities. Earlier this year, Kroger added an ad-to-sales attribution feature for its self-serve ad platform in a partnership with KPM and Microsoft’s PromoteIQ.

Two months ago, Kroger said it would start using the Vibenomics in-store audio ad network to enable brands to reach shoppers based on weather and other variables in more than 2,000 stores.