World Depicted In Amazon's 'Utopia' Is Anything But 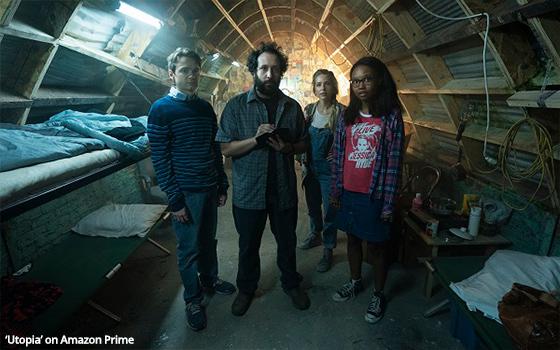 The timing is likely coincidental, but a new drama series coming to Amazon Prime this week touches on important contemporary topics that are top-of-mind for everybody right now.

The topics are general and international in scope -- pandemics, natural disasters and global warming.

Here in the real world, we are in the midst of a pandemic, while at the same time witnessing a number of natural disasters including multiple wildfires in the West and so many tropical storms that they ran out of letters in the alphabet to name them with.

In this new Amazon drama series, ironically titled “Utopia,” all of these crises were foretold in a comic book (or series of them).

The comic’s Nostradamus-like predictions were so accurate that the book series has spawned a devoted group of superfans who have never personally met but share their passions with each other online.

In the first episode of the eight-part “Utopia,” four of them (pictured above) finally meet at a comic-fan convention where a young couple is auctioning off a newly discovered, original manuscript of a comic-book sequel to the first one.

It is from this new, unpublished and heretofore unknown comic that the series gets its title, “Utopia.” The comic-book series that preceded it -- and accurately predicted a raft of disasters that all came true -- was its titular opposite, “Dystopia.”

This show is surprisingly good. Why “surprisingly”? Because these days, any TV show that emerges right from the get-go as “good” is a surprise.

Amazon’s “Utopia” is a remake of a British series of the same name. The showrunner of the American show is Gillian Flynn, author of “Gone Girl” and “Sharp Objects.”

The show does a great job of depicting a particular aspect of our modern world -- namely, the way people cluster together remotely and impersonally over a shared interest, and then, how those relationships evolve and change once these same people come face to face with each other.

The show is also a story about the dangers inherent in the electronic social systems we have created. In “Utopia,” for example, the couple that stumbles upon these rare works of comic-book art and then seeks to sell them have no idea what they are getting into.

Suffice it to say that their plan to get rich quick from the sale of these materials flies off in directions neither they, nor anyone watching this show, had any reason to expect.