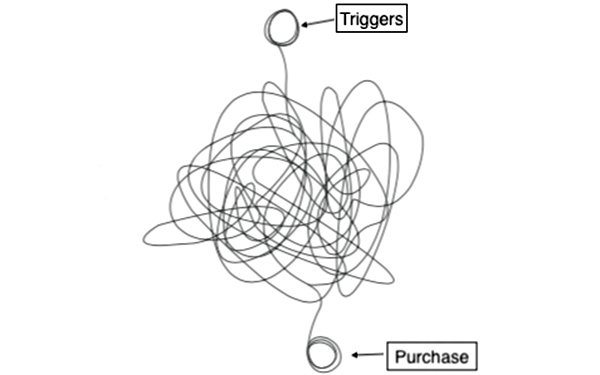 My husband is shopping for a mattress. Not for our use, but for the guest room. Since I won’t be sleeping on it, I have been able to distance myself from the process, which has gone on for weeks, and simply observe.

Originally inspired by an online ad featuring a significant discount on a high-quality mattress (he was not in the market for a mattress before this ad), my husband entered an intense and lengthy research phase during which he both explored new brands from different retailers and evaluated each offering based on the standard category heuristics: comfort and durability, tempered by price, and very specifically, screaming deals. And armed with recommendations from friends and family, he embarked on a road trip to four different stores to test beds.
I can’t wait to see what actually triggers a purchase. I’m betting it's the best deal on the highest-quality mattress that falls within his budget. But it wouldn’t surprise me if he gets hooked in by another contender entering the consideration set — forcing him back into evaluation mode and pushing out a purchase decision even further. It’s a good bet because the modern consumer spends way too long mired down in the middle of the purchase process.
Back in the day, our shopping process was more straightforward. At least that’s what the traditional purchase path depicted. At one end, shoppers found themselves in the market for something. At the other end, they celebrated their purchase and told all their friends about it. Along the way, they became aware of a specific brand, did some research and then made the decision to buy. It was all very linear.
One could argue that not much has changed other than the speed with which shoppers can accumulate a large consideration set while evaluating potential purchases — all without leaving the comfort of their living rooms. But the big difference is that the decision process is clearly no longer linear. Shoppers bounce back and forth between awareness and consideration so much so that in a recent study of this phenomenon, Google has named it the “Messy Middle”.
The Google study makes a critical point about emotional implicit bias. It contends that while we like to think we’re making rational choices, in the end, our lizard brains take the reins and we make an emotional call.

Fortunately, as Google sees it, people are predictably irrational, and there are a few tactics that will nudge them into purchase. Peer reviews, influencer endorsement, freebies and the threat of scarcity are among those factors. Google also notes that immediate gratification works -- but clearly. that’s not a motivation for my husband.

So how should brands respond to these forces? Most importantly (and obviously) just show up -- both with awareness messaging to get the brand name registered, and sales incentives to seal the deal.

Google maintains that being there at the point of decision with a carefully crafted message featuring one or more of the tactics that appeal to our lizard brains is key.

I don’t know how the mattress people found my husband. Maybe Labor Day really is a key selling season for mattresses, but they actually triggered him into a purchase he wasn’t considering. Then all the mattress brands piled in with targeted and retargeted ads as he explored and evaluated.

He’s close to making a decision based on price: specifically, a screaming deal on a fancy king-size mattress. I have explained that a) it won’t fit and b) we’d have to buy all new bedding, potentially negating the benefit of the deal. But his lizard brain seems helpless to resist because I am now being asked to go to the store to determine the difference between plush and medium firmness.