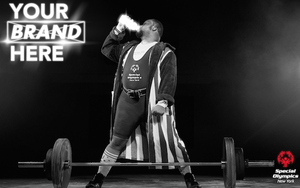 A new campaign for Special Olympics New York asks brands to “Put Your Ad Here” and support the organization as it celebrates its 50th anniversary amid the financial challenges of COVID-19.

The pro bono effort from Edelman—featuring three Special Olympics New York champions—not-so-subtly challenges brands to expand their support of major spots events and elite athletes  to those with intellectual disabilities.

A 60-second spot mimics the black-and-white imagery of major sports commercials and the products they promote.

The voiceover is by Genesis Duran, an 11th-grader from New York City who has won five gold medals in basketball and soccer. “Why am I great?” Duran asks. “Because when I compete, I sacrifice everything I’ve got. Practice kills fear. Doubts are traitors. Around here, only talk wins.”

The spot closes with a nod to typical sports-related ads by highlighting one of the athletes’ sneakers, while another drinks from a Gatorade-shaped bottle and the third dons fancy headphones. The words “Your Brand Here” flash on the screen.

The campaign arose from an in-house initiative at Edelman called Shark Tank For Good, according to creative director Jesse Suchmann, whose younger brother Sam has Down Syndrome.

“I grew up going to Special Olympics events with him,” Suchmann tells Marketing Daily. “I met some of the most amazing, bad-ass athletes on earth there. Everybody brought something different, and it was all really amazing.”

Asked if the creative process involved replicating the ads of specific sports brands, Suchmann says, “The interesting thing is, we didn’t watch specific ads. We all just knew the clichés. It clicked immediately. People were like, ‘Oh, it’s a sports ad. It’s got to be black and white for sure.’”

He believes there’s too much of a disparity between what brands spend on popular athletes and sporting events and their support of organizations like Special Olympics.

“I wonder if now, given the incredible disparity of funding, would it be the right time for brands to reconsider how they approach partnerships like this?" he asks.

The spot is running on digital and social platforms.

“[Special Olympics] budgets aren’t huge, so they don’t really have big money for a TV buy,” Suchmann adds.  “But that said, if there’s anybody looking to donate TV space for this campaign, we’ll gladly accept it."