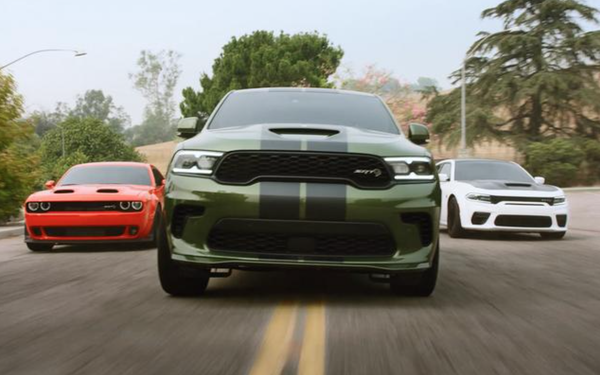 A 60-second spot “Family Motto” takes a page from the 2006 film “Talladega Nights: The Ballad of Ricky Bobby.” It debuts across Dodge’s social media channels today.

The spot, created in partnership with GSD&M, features Gary Cole as a younger Reese Bobby on the chase after his 10-year-old son Ricky Bobby.

It borrows the line “if you ain’t first, you’re last” from the film to celebrate the Dodge brand’s recent first-place finish in both the J.D. Power APEAL Study (mass market) and J.D. Power Initial Quality Study (IQS). It marks the first time a domestic brand has earned both top spots in the same year.

The brand briefly considered recognizing the awards in a serious-toned spot, which would be uncharacteristic of Dodge, says Tim Kuniskis, FCA North America's head of passenger cars.

It wouldn’t work for Dodge to take the approach, say, of Chevrolet and its “Real People” series of spots.

“If everyone else is going to show people in khakis saying they are brand ambassadors, let’s do it different than everyone else,”  Kuniskis says. “We don’t have the big marketing dollars that those monobranded companies have. So we need to do stuff different.”

Kuniskis characterizes Dodge as “kind of the ‘People’ magazine of brands. We like to have fun, we don’t like to take ourselves too seriously. But these awards threw us for a loop. … This is a big deal. We need to be serious, mature, respectful. We need to represent the domestic industry, to be the first ones to get this. That’s a tough spot for Dodge. We do burnouts, donuts and bad-ass attitude.”

The spot opens circa 1981 in Talladega County with Reese Bobby in a new 2021 Dodge Durango SRT Hellcat, on a walkie-talkie imploring his son Ricky Bobby, who appears to be driving a 2021 Dodge Charger SRT Hellcat Redeye to pull the vehicle over. During the chase, Ricky Bobby calls out to his best friend Cal Naughton Jr., who appears to pull up next to Ricky in a 2020 Dodge Challenger SRT Super Stock to help him outrun his father.

Sony Music Entertainment and AC/DC provide the video’s music, “Shot in the Dark," the first song released by the rock band in six years. The AC/DC’s song “T.N.T.” was featured in “Talladega Nights: The Ballad of Ricky Bobby.”