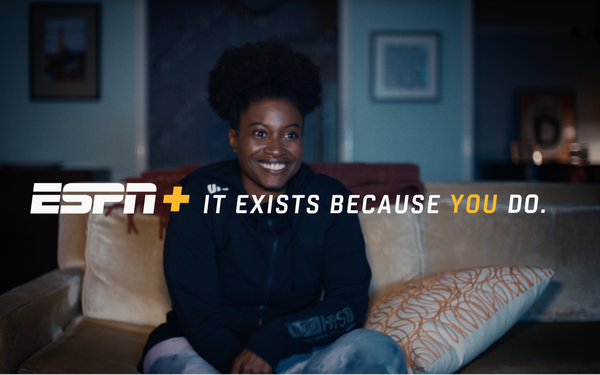 ESPN+ is launching a brand campaign that aims to show how the streaming channel is doubling down on delivering high-quality live sports and specialized content.

The effort from Austin-based creative agency Preacher includes “It Exists Because You Do,” a 30-second anthem spot that breaks today.

In addition, a series of 15-second and 6-second ads will run across all of ESPN’s TV and digital properties, and also will be supported by off-channel broadcast, along with digital.

While the brand has engaged in marketing its sports and original series programming consistently over the past few years, this marks a broader brand-focused initiative, according to the company. ESPN+ is an over-the-top video streaming subscription service available in the United States, owned by Walt Disney Direct-to-Consumer and International, in partnership with ESPN Inc.

Creative celebrates passionate yet often-underserved groups of sports fans such as the Pittsburgh native "supporting a different black and gold” (Borussia Dortmund, of the Bundesliga, a professional soccer league in Germany); and  “the fan, a walk away from Wrigley field, who’s just as drawn to the [UFC] Octagon."

What exactly ESPN+ is and who exactly it's for wasn't clear to most, says Greg Hunter, creative director, Preacher.

"Our task was to relaunch the brand and bring the fuzziness around this streaming service into focus," Hunter tells Marketing Daily. "ESPN+ isn't simply 'more ESPN.' It's ESPN's offering to those whose sport of choice isn't the sport of the masses. While the NFL and NBA may be the stars of this country's show, there are plenty of German soccer diehards and MMA fanatics who'd love an easier way to watch the sport they love. This campaign is all about telling those fans we know they're out there and letting them know they're the reason ESPN+ is here.”

ESPN+ launched in 2018 and features a slate of live sports, original series and studio shows.

The channel’s offerings continue to grow and so does its relationship with its fans, says Russell Wolff, executive vice president and general manager, ESPN+.

“We felt now was the right time to launch this campaign, speaking to its fan-centric nature, and celebrating those fans,” Wolff says in a release. “Clarity and truth make messages powerful and [the campaign] is grounded in the fact that ESPN+ is directly connected to, and growing because of, fans.”