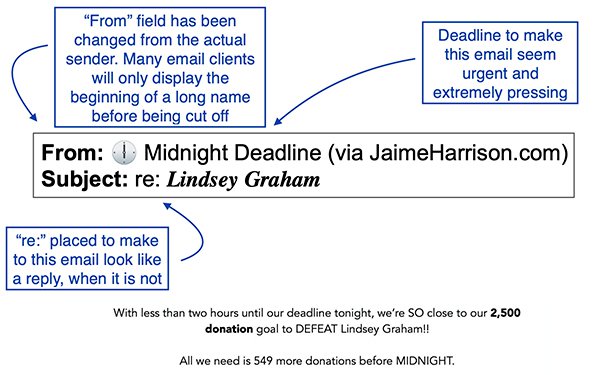 “We find that manipulative tactics are the norm, not the exception,” the study authors write.

“Some of these tactics are well known, such as sensationalistic subject lines. Others are more devious, such as deceptively formatted 'From:' lines that attempt to trick recipients into believing that the message is a continuation of an ongoing conversation,” the authors add.

For the report, researchers examined more than 100,000 emails sent by nearly 2,900 senders between December of 2019 and June 25 of this year. The senders included about 1,084 federal candidates, 1,359 state candidates, 264 political action committees and 127 other organizations.

Princeton's Arvind Narayanan, one of the study's authors, on Monday criticized some of the observed tactics.

“We’re used to seeing these tricks on shopping and travel websites but manipulation in the political sphere is a threat to democracy,” Narayanan tweeted. “While there’s a lot of worry about targeted advertising, manipulative emails -- despite being extremely effective -- have flown under the radar.”

One strategy involved using subject lines like “(no!) Mark Kelly SLANDERED!” Another involved using words like “deadline,” which aim to create a sense of urgency.

A different ploy involved obscuring the senders' identities, so that users couldn't see who the email came from without opening it.

Researchers also found that some fund-raising ads used “devious and potentially deceptive” strategies, such as inviting recipients to take a survey, but then making it appear as if they needed to donate in order to submit their responses.

The report also found that some senders were sharing people's email addresses without informing them.

Overall, researchers observed that 200 senders -- 153 federal and state candidates and 47 organizations -- shared email addresses with others.

Researchers plan to update the paper after Election Day.