Past, Present And Future: Our World According To Television 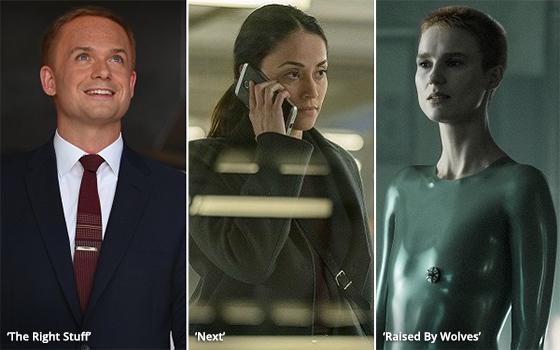 The past was a time of cockeyed optimism, the present is uncertain and pessimistic, and the future consists of a world that is barely recognizable but evolves directly from our own.

That's a vastly generalized way of summarizing the world according to television based on new TV shows that have come up for review here in recent weeks and months.

To take up the middle subject first -- the present -- TV's evident jitters about our contemporary world are not unfounded, since many of us are feeling jittery today.

However, in the relevant shows reviewed here this year, TV's apparent nervousness about the state of the world has nothing to do with COVID-19 in particular.

Although the world has been in the thick of the pandemic and its restrictions since March, TV's pessimistic point of view is based mainly on technologies whose evolution precedes the current crisis, and continues during it.

Recent shows in which technology runs farther ahead than the ability of humans to control it or accurately predict its consequences include “Next” on Fox and “Utopia” on Amazon Prime.

In “Next” (featuring Fernanda Andrade, center photo above), artificial intelligence software becomes so sophisticated and advanced that it seems poised to take over control of the world from humans (a theme at least as old as “2001: A Space Odyssey”).

In “Utopia,” a group of comic-book geeks who get together online to share their passion for a comic-book series have no idea that violent consequences are about to result from a shared interest that for them was just simple fun.

Examples of such shows from earlier this year include “Devs” (FX on Hulu) in which a powerful tech titan was seen secretly working on a process for pre-programming human DNA, and “Westworld” (Season Three on HBO), which is about manmade, humanlike robots running violently amok.

“Westworld” in particular might even be considered a future show, and not a present-day one. But it does traffic in technology that is already here, or nearly so. Call it a near-future show if you like.

By contrast, “Raised By Wolves” on HBO Max (pictured above right) offers a true future experience. Like so many futuristic dramas that are made for television, this one offers a grim take on what the future holds for planet Earth and its inhabitants.

In “Raised By Wolves,” the time frame is post-apocalyptic with some sort of wide-ranging intergalactic war underway that has stranded various groups of android and humanoid refugees on distant planets.

Earlier this year, we saw the long-awaited premiere of “Snowpiercer” on TNT -- the drama series in which the only survivors of a planetary apocalypse are the few hundred people who are now permanent passengers on a super train to nowhere.

Silly as this show was, it shared a theme with “Raised By Wolves” and other such futuristic shows, which is: They almost always deal with the aftermath of disasters that stem from technologies whose evolutions are already underway and wreaking havoc in the present-day shows.

As for the past, technology plays a part in “The Right Stuff,” the new limited series about the early days of NASA and the U.S. space program that is making its debut on Disney+ this week (pictured above left).

But unlike the way technology is depicted and perceived in our scripted dramas about contemporary times and future eras, in “The Right Stuff,” hope and optimism go hand-in-hand with the technology that is enabling mankind’s first forays into outer space.

Back then, says this show, the sky was not the limit even if that show's time period -- the 1960s -- in reality had at least as much strife, conflict and uncertainty in it than the times we live in now.

What's the takeaway? That TV looks backward with rose-colored glasses, perceives our present world as one fraught with danger, and concludes that in the future, the world will pay the price for today's mistakes.

Or to put it another way -- if you are looking for optimism, TV is not the place to go and look for it.