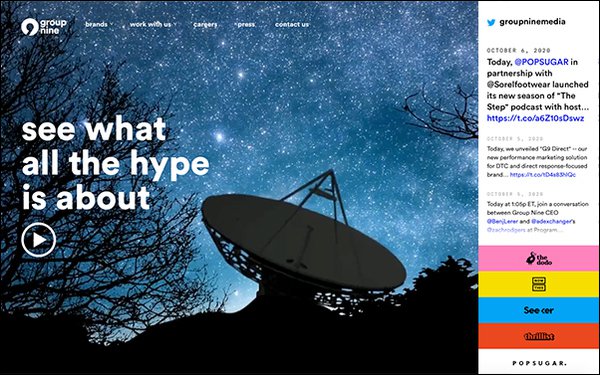 It combines first-party data from five of Group Nine’s brands (including The Dodo, Nowthis, Popsugar, Thrillist and Seeker) and content creation capabilities from its branded-content studio Brandshop.

The first D2C advertisers to work with G9 Direct are Casper, Fi and by Humankind.

“G9 Direct is unique from other performance-marketing agencies because we are able to tap into Group Nine’s massive audience and their deep love for our five brands across numerous lifestyle categories,” stated Group Nine’s Chief Revenue Officer, Geoff Schiller.

“We are combining our rich, first-party data, huge reach and social-media expertise with the advertiser’s second-party data to deliver impactful, bottom of the funnel marketing campaigns with relevant messaging that drives real results,” he added.

The company also announced today that its five mobile-first brands will become alpha partners with Google on its new Web Stories product. Formerly AMP Stories, the product is Google's take on the visual story features on platforms like Instagram, Facebook and Snapchat.

“We have been working with Google to ramp up their new Web Stories ecosystem, and to date, have created over 200 Web Stories from our five brands and are seeing promising engagement,” stated Group Nine Chief Insights Officer, Ashish Patel.

Group Nine joins other publishers (such as Vice, Bustle, Refinery29 and Forbes, among others) who will be featured in Google’s dedicated Web Story carousel in the Discover feed.

The product launches in the feed today in the U.S., Brazil and India, with plans to expand to more countries in the future.