Ad Bubble Tsunami On its Way? 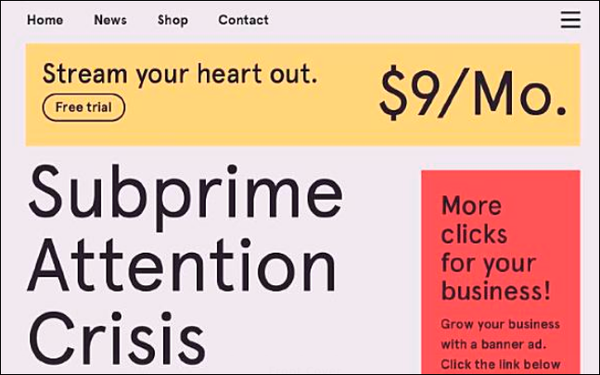 In a new book, “Subprime Attention Crisis,” former Google executive Tim Hwang contends that since behavioral targeting doesn’t work very well (and generates lots of hidden costs), digital advertising is a bubble that could burst as soon as marketers figure out their ROI is terrible.

He doesn’t say just when this might be, but predicts the economic downside will rival the subprime mortgage housing bubble burst of 2007. Oh, and it could crush the big digital ad companies like Facebook, Google and even Amazon as marketers move their ad spending to other media, cooling off the platforms’ currently red-hot equity performance.

While the comparison to the housing crisis is interesting, the notion that data-driven digital advertising (especially programmatic) doesn’t really work very well and rewards lots of tech middlemen, is kinda old news. Bob Hoffman, for one, has been saying this in columns, speeches and books for years. So far, this has had little to no effect on anyone’s stock price.

Hwang apparently cites one experiment that used six different advertising platforms in an effort to reach Australian men between the ages of 25 and 44. This automated microtargeting performed slightly worse than random guessing.

So this makes all marketers who use these platforms suckers, right?  A number of major advertisers dropped their Facebook spending for a month or so as a shot across the bow to get better about policing hate content. I’m sure many used that month to try on other media, only to quietly return to Facebook.

Many D2C companies rely almost exclusively on digital advertising to build and grow their customer bases. As their costs to reach vast new audiences on social platforms becomes prohibitive, some have tried television with some success. But almost none of them have completely abandoned digital marketing.

There are more than 7 million active advertisers on Facebook alone. And I am supposed to believe that none of them have bothered to calculate their ROI? Surely at least one guy has said to another, “Hey, lookit this. Our AdWords clickthrough rate is .02 and our conversion rate is .05. Should we keep throwing good money after bad?”

In spite of some Super Bowl spots that might indicate the contrary, most marketers are not stupid, and they spend a fair amount of time checking their advertising ROI and making adjustments to improve it. I’m certain the reason they’re still using the “endangered” platforms is because they are working sufficiently for companies to keep spending money on them.

Hwang’s book is not the kind one writes for your average man on the street.  It is clearly targeted at advertisers.  It will be interesting to see if anyone bothers to listen to its message.

advertising, digital
1 comment about "Ad Bubble Tsunami On its Way?".
Check to receive email when comments are posted.
Next story loading