Hulu's 'Helstrom': Devil May Care, But You Will Not 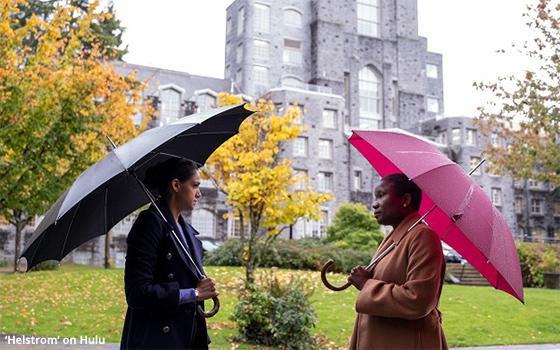 Hell is 56 minutes of watching “Helstrom,” the new demonic-possession drama that starts streaming Friday on Hulu.

That was the length of Episode 1 of this new series that the TV Blog previewed earlier this week. It was just under an hour, but felt like an eternity.

I have used the “Frankenstein's monster” analogy occasionally in the past to describe the way a new TV show seems to be put together from parts scavenged from TV shows and movies that came before it.

The comparison is no less applicable to “Helstrom,” which seems to be about an Oregon family whose four members all appear to be possessed by demons, but in varying degrees.

There are the two grown children, Daimon (played by Tom Austen) and Ana (Sydney Lemmon); their deranged mother (Elizabeth Marvel) who is committed to a maximum-security institution; and their father, who may or not be still alive, but who is (or was) a serial killer.

If the two grown children are possessed by evil, then they have somehow figured out ways to harness their evil powers, at least in part, to join the fight against evil.

So, like Dexter Morgan from Showtime's “Dexter,” they have a preference for killing serial killers (or at least one of them does).

But besides “Dexter,” “Helstrom” is derived almost entirely from TV shows and movies about devils, demons and exorcisms. I could single out a few titles here, but in general, “Helstrom” is descended from basically all of them.

As such, it has nothing new to say about demonic possession, the rites of exorcism, or the mysteries of the Vatican and its apparent secretiveness when it comes to the centuries-long fight it has supposedly waged with Satan.

Like so much of the filmed product that comes out of Disney these days, this TV “Helstrom” has been adapted for Disney-owned Hulu from a comic-book series published by Disney-owned Marvel.

Apparently, the Marvel version spells “Helstrom” with two L's (which makes sense) and also gives the grown daughter the name of Satana, which also makes sense. Shortening her name to Ana for the TV show does not.

“Helstrom” takes place in rainy Portland, Oregon, the same drippy locale of a short-lived cop show seen on Fox in 2015 that was called “Backstrom.”

By coincidence, the actor who played “Backstrom” (a name, like Helstrom, whose second syllable is an anagram of “storm”) was Rainn Wilson. Get it? Rainn?

Anyway, rainy Oregon -- as illustrated by the above umbrella photo from “Helstrom” -- makes “Helstrom” even more dreary than its subject matter would have already made it.

It is a grim, sad, dark and violent TV show. This should go without saying, but “Helstrom” is the last thing most of us need to watch on television right now. Whatever possessed Hulu to put it on?