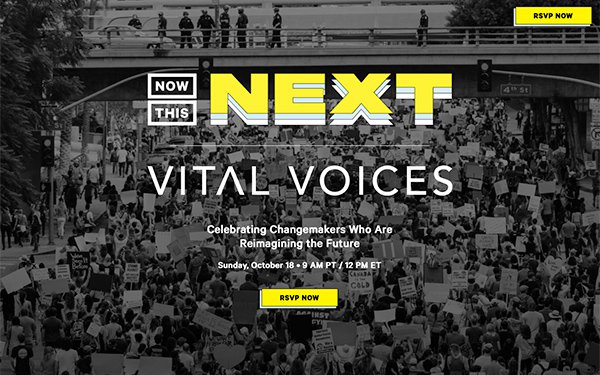 The first NowThis Next event will be hosted in partnership with Vital Voices Global Partnership, and take place on Sunday, October 18.

It will be available exclusively on NowThis channels, including a digital hub for the event and its social-media channels.

Vital Voices is the inaugural partner. The nonprofit invests in women leaders working to solve the world’s challenges.  Over the last 22 years, the organization says it has built a network of 18,000 change makers across 182 countries.

NowThis Next will feature changemakers, celebrities and thought leaders amplifying the voices of up-and-coming women who are part of the Vital Voices network.

Other participants will be announced at a later date.

Speakers will discuss issues such as the climate crisis, diversity and inclusion, and women’s empowerment.

“2020 has made it unequivocally clear that critical societal issues -- from the climate crisis to racial justice and gender equality -- are all interconnected,” stated Alyse Nelson, president-CEO of Vital Voices Global Partnership. “We are excited to partner with NowThis to illuminate the critical role women from diverse backgrounds must play in reimagining and rebuilding our world.”

Singer JoJo will close out the show with an exclusive digital performance.

Additional lead partners include Bank of America, Olay, Dawn, Swiffer, Pantene, My Black Is Beautiful, Aussie and Hair Biology, among others.

The audience will also have opportunities to participate in workshops, polling, donating to Vital Voices and social calls to action. Attendance is free.

Held virtually this year, Schiller noted the event will be held in person in 2021 and beyond.

She will also spearhead relationships with multicultural agencies and advertisers to connect brand partners with Group Nine’s audience.