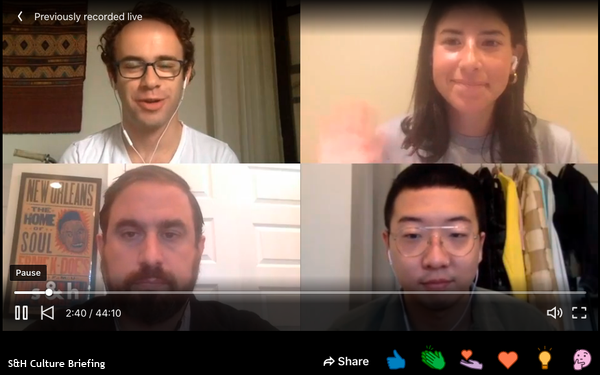 As far as conspiracy theories go, QAnon has always seemed to me to be one of the most untethered from reality, but I understand there is a strong base of Americans who feed on anything that has to do with child eating or sex trafficking cabals.

But for the life of me, I don’t understand why. That was until I sat in on one of Sparks & Honey’s awesome culture briefings this week, which provided some keen insights on why wacko conspiracy theories -- especially QAnon’s -- are gaining a following: gamification.

That’s right -- the same reward mechanics that go into getting people addicted to playing pure-play console or social media-distributed games apparently are driving some users to become followers of QAnon.

It’s not so much that they buy into the conspiracies, as that they are looking for something to participate in. In other words, it’s just a form of entertainment for them.

Interestingly, I’ve had the same theory about why the incumbent President is so popular among some of his base: It’s not necessarily that they like him, believe him, or approve of his presidenting, so much as they just want to be part of something diversionary (ie. entertainment).

I can’t say how many of the president’s supporters fall into this bucket, but I remember discussing his prospects as a candidate with the folks at Marketing Evaluations -- the Q scores people -- before he got elected, and they said based on their historical data as an entertainment and reality TV personality, many people would vote for him, because they were, effectively, buying into the character he portrays.

So I won’t say I was completely surprised when the Sparks & Honey team made the case for the gamification of QAnon, but it sent my mind reeling with the reasons why people would want to participate -- even vicariously -- in something so dark and abhorrent. Again, I’m talking about QAnon, not the President, per se.

“It is not just a group of conspiracy theorists who are spreading hoaxes to explain the world, but this is the first known instance of a crowd-sourced cult,” explains Hanna Jerome, culture strategist at S&H.

“These crowd-sourced cults,” she continues, “are becoming hubs of conspiracy theories, attaching themselves to everything along the lines of anti-vaccine ideas to climate change skepticism to mobilize people to bring them into a larger conspiracy fold.”

The individual theories spread by the hubs may be different and distinct, but they are organized by a meta view of “deep state cabals or secret organizations pulling the levers,” Jerome notes, adding, “And of course, COVID-19 has added a fresh new group of targets as public safety, governance, liberties have become a concern for many people.”

So how exactly is this being gamified?

“Previously, in the past when we used to talk about conspiracy theories, it was easy to dismiss people who follow such theories,” explains S&H strategist Joon Park, noting: “As conspiracy theories have become gamified, there’s an element of participation that’s being reinserted into the users so that they feel like they’re doing their homework.”

On that note, S&H Director of Cultural Strategy Ben Grinspan jumped in to recall an interview on NPR with a journalist who had interviewed QAnon followers and found, “They didn’t really sort of care if it wasn’t true.”

He pointed at that in the past when QAnon has made predictions about things that were supposed to happen on certain dates, but didn’t, they said “that’s not what was important to them. What was important to them was the action of feeling they were part of something or playing a game that brings them some sort of mood elevation a a time when I guess people need it.”

If you ask me, this is a dangerous game to be playing, because even if people don’t “buy into it” at first, given enough repetition they can become conditioned to accept the role playing for something that is true.

But wait, it gets even more nefarious, because those behind QAnon have begun utilizing these gamification techniques to expand the reach and recruit followers beyond the initial cadre of white male 8chan users who originally spawned it.

This campaign promotes the theory “that child sex trafficking is out of control in the U.S. and around he world and that no one apparently is paying attention,” says S&H’s Jerome, noting that it has been picked up by celebrities, politicians and even the President himself.

Most insidious of all, she says many of the celebrities and others propagating the hashtag aren’t even aware of QAnon connection at all.

The important lesson here, she says, is that by using platforms, gamification and campaigns targeted at subgroups beyond the original white male 8chain core, QAnon is capable of spreading disinformation at a magnitude greater than what would have been possible in the past.

There’s more to S&H’s thinking on this subject if you want to check out the archived video here, but this all prompts me to come up with a conspiracy theory of my own: who is actually behind QAnon.

According to the 8chan lore, it’s someone from the deep state itself, while others surmise it was an 8chan moderator who concocted the whole things as a form of cosplay, or role-playing, which would serve the S&H gamification theory well.

My theory: It fits perfectly into the goals of certain hostile foreign governments who like to undermine western democracies by spreading disinformation to sow discord and civil unrest. Hmmm, I wonder who that could be? 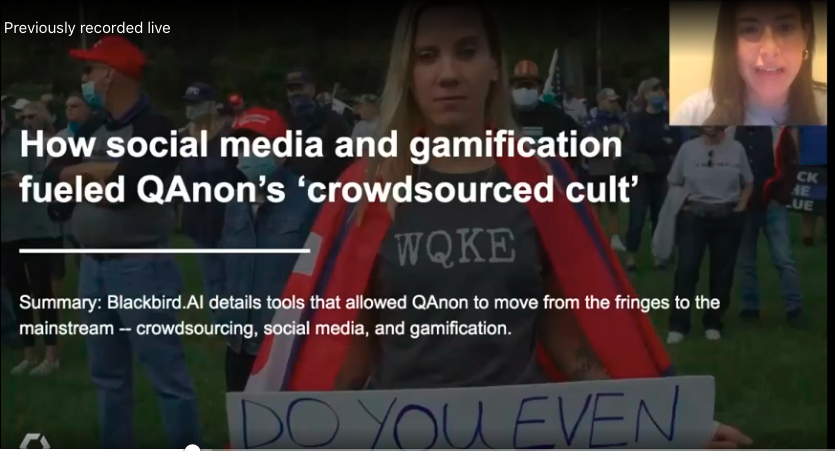