In A Bid To Save The Agency He Founded, Stan Richards Steps Down At The Richards Group 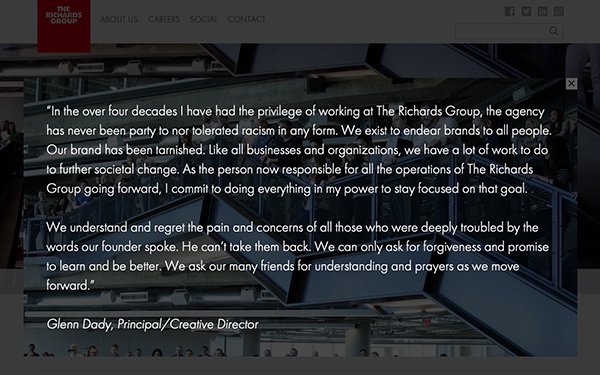 The Richards Group founder Stan Richards has just stepped down, a week after he threw the Dallas-based agency into turmoil by making racist statements about long-time client Motel 6 during an internal creative meeting.

The move just may save his agency.

No guarantee, but we’ll see. Multiple clients have already fired the agency in the wake of the controversy, including Motel 6 and Home Depot both of which had been with the agency for decades. Dr Pepper, Keurig and Orkin also just left the agency.

Richards acknowledged and previously apologized for calling an ad concept pitched at the meeting as “too Black,” and one that would offend the motel chain's “white supremacist constituents.”

“If this was a publicly held company, I’d be fired for the comments I made. But we’re not public, so I am firing myself. Our employees, first and foremost, deserve that.” Richards said, in a statement issued by the agency.

The agency said that Glenn Dady, who the 88-year-old Richards last year anointed as his heir apparent, would now assume full responsibility for operations at the agency.