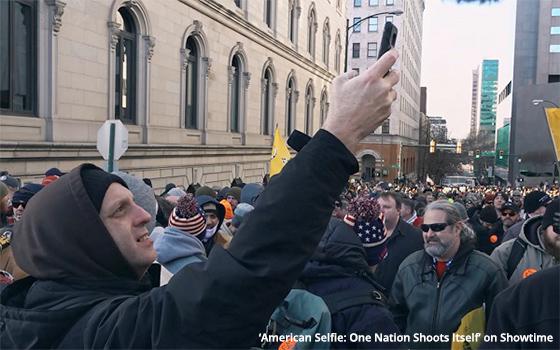 Filmmaker Alexandra Pelosi apparently set out to make a documentary about the narcissism of ordinary Americans, as reflected in our tendency to take millions of pictures of ourselves and then share them with others.

But on her journey in search of selfies, she seems to have discovered something else in the American air that presented itself as a larger, and hence more important issue than the reasons why so many people today take so many pictures of themselves.

Call it an accident of timing. Pelosi's journey began in September 2019, long before COVID-19 and George Floyd.

But even back then, everywhere she went, she and her camera crew came upon copious evidence that the divisions in our society that we all live with now as we head into a crucial election were already in full flower.

And then, as the months rolled by and America found itself in the grip of a crippling pandemic and a tidal wave of social-justice protests, the direction of her documentary became crystal clear.

It veered off from an examination of mere selfies to America in search of itself. Pelosi even gave the finished product a provocative title: “American Selfie: One Nation Shoots Itself.” It premieres on Showtime on Friday.

If she meant the title to imply that she found a nation that is in the midst of slowly but surely committing a kind of national suicide, then the message is received.

Those who will read about this documentary and then tune in hoping to see an analysis of American selfie culture will instead get a documentary about the state of the United States.

Pelosi (who is the daughter of House Speaker Nancy Pelosi) and her executive producer, the incomparable Sheila Nevins who headed up HBO's documentaries for the better part of four decades, have produced a great documentary.

But at the same time, it is ugly, unsettling and sad as it depicts a nation irretrievably locked in factional conflicts.

This 90-minute documentary takes the form of a month-by-month travelogue, starting in September of last year and concluding this past summer on July Fourth at Mount Rushmore.

Since all of us have lived through the time period depicted in “American Selfie,” the civil strife it shows us is nothing any of us have not already seen on the evening news for months and months.

For some viewers, it might be “too soon” to absorb a documentary like this one -- to apply a phrase, “too soon,” that comedians use in a quasi-humorous way to refer to tragic events that happened too recently for stand-up comedians to deliver jokes about them.

If “American Selfie” is difficult to watch, then that is also its best feature. This documentary is saying to us: Take a look at this, America -- this is your selfie.