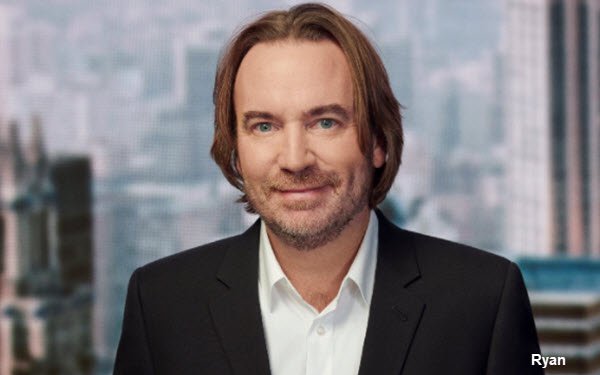 As president and CEO of newly minted ViacomCBS Streaming, Ryan will oversee CBS All Access, set to relaunch in significantly expanded form as Paramount+ in early 2021, as well as Pluto TV.

Marc DeBevoise, currently chief digital officer, ViacomCBS and president and CEO, ViacomCBS Digital will leave the company after serving as an advisor for a transitional period ending at year’s end.

The new, integrated structure, effective immediately, is designed to “ensure a more holistic approach across both free and pay streaming, more closely align the company’s streaming initiatives globally, and enhance ViacomCBS’s ability to leverage the cross-house franchise and content strength of ViacomCBS to seize the global opportunity in streaming,” says the company.

In addition, Kelly Day, COO of ViacomCBS Networks International (VCNI), will take on an expanded role as president of streaming, VCNI, overseeing all ex-U.S. digital and streaming platforms in addition to her COO responsibilities.

Day will work closely with Ryan and David Lynn, president and CEO of VCNI, on ViacomCBS’s international streaming expansion. That will include the launch of Paramount+ in Australia, Latin America and the Nordics in 2021, as well as the ongoing international rollout of Pluto TV.

As previously planned, Pierluigi Gazzolo will step down from his position as president, streaming and studios, VCNI, to pursue other interests.

As President and CEO, ViacomCBS Streaming, Ryan will lead ViacomCBS’s efforts to further accelerate Pluto’s growth and launch Paramount+ within the company’s previously declared new framework: a “franchise-driven” strategy that seeks to leverage the content from the company’s diverse portfolio to maximum effect across platforms.

To that end, the company’s various studios are being turned into multiplatform content providers, and Ryan will work with its “content council” to accelerate the strategy. This will “maximize the deployment of both IP and talent relationships across ViacomCBS’s streaming and other platforms,” says the company.

Ryan, who sold Pluto TV to ViacomCBS in early 2019 for $340 million, was picked to lead the entertainment conglomerate’s declared business focus for the future based on Pluto’s galloping success.

The AVOD saw its monthly active users more than double to 26.5 million between January 2019 and this past August — in part with the help of COVID sheltering-at-home, of course — and Ryan has projected that they will double again within two years.

In this year’s second quarter, Pluto TV tied with NBCUniversal’s new Peacock streamer on ad revenue, with each bringing in $80 million, according to MoffettNathanson estimates.

Ryan is “a pioneering streaming executive who has demonstrated extraordinary talent in creating a differentiated, consumer-centric service that resonates with global audiences,” ViacomCBS President and CEO Bob Bakish stated in announcing the changes. “He will bring this same digital expertise, entrepreneurial spirit and strategic, collaborative mindset as we deliver the very best of ViacomCBS to Paramount+ and our portfolio of streaming platforms.”