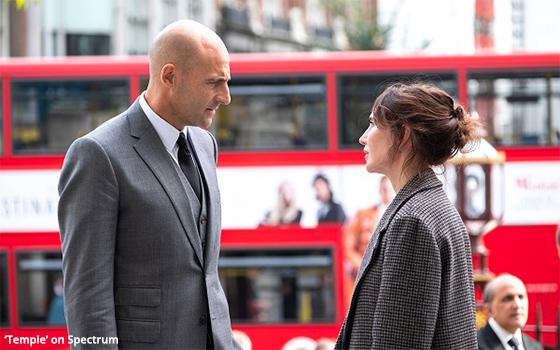 And now, you can add a super-surgeon to the list of mysterious men (and sometimes women) who build super-secret lairs for their eyes only (and sometimes the eyes of a select few henchmen and assistants).

In the new drama series “Temple,” imported from the United Kingdom and due to start streaming here in the U.S. on Spectrum cable on Monday (October 26), a super-doctor named Daniel Milton (played by Mark Strong) sets up a secret clinic beneath the streets of London.

This particular man cave has apparently been carved out of unused space connected to one of the subway stations in London -- specifically, the Temple station, from which this series gets its title.

This man cave is seemingly just steps away from the subway platform (through a door and down some stairs). And yet, this facility remains a secret to the city government, the medical establishment and the city's transportation authority.

In this supposedly undetected space, Dr. Milton runs a clandestine clinic in which he treats the indigent, and also certain unsavory types for whom a hospital visit might pose risks such as arrest.

The doctor is also conducting some private medical research there that is deeply personal to him. This is the ostensible reason for why he has set up this literally underground medical center and research laboratory in the first place.

At no time in the series’ first episode do we learn why he must conduct this medical research in secret. Perhaps we will learn this in some future episode.

This series is the latest to be presented under the Spectrum Originals banner, although this show is hardly “original” in the classic sense. It premiered last fall on Britain's Sky One. Moreover, it is a remake of a series that originated in Norway.

Nevertheless, and despite its hard-to-believe premise of a secret medical clinic operating under a city subway system, the show has a certain appealing style represented primarily by its charismatic leading man, Mark Strong.