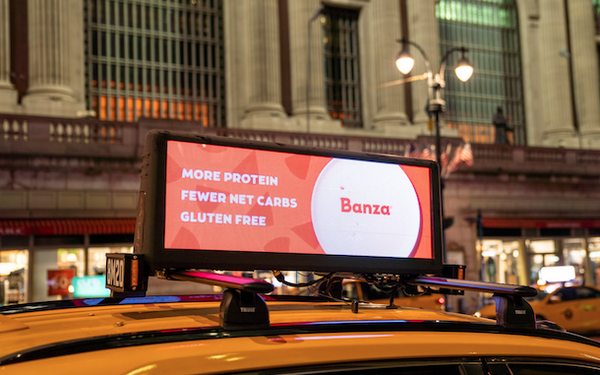 CPG brand Banza is venturing from store shelves to the frozen food aisle with the launch of chickpea-based pizzas backed by the company’s largest marketing push to date.

Created in-house, a 30-second spot extols the virtues of what Banza says is the first commercial, chickpea-based pizza crust, while encouraging the consumption of pizza every night.

The reference to protein and net carbohydrates is a comparison to “leading” wheat-based and cauliflower-crust competitors.

Cauliflower has “definitely been a huge driver of alternative pizzas over the course of the last couple of years,” Banza vice president of marketing Nicole Landesman tells Marketing Daily. Meanwhile, “our mission that we’ve defined over the last five years is to essentially increase the consumption of legumes. It’s one of the best foods for human health and the environment, but we actually eat far less of them than we should.”

Since the company launched in 2014, Banza’s chickpea-based pasta products have gained distribution in 13,500 retail outlets. Breaking into the frozen food section poses its own challenges, according to Landesman.

“Frozen is definitely a more competitive category because there’s limited freezer space in every store. But we’ve had great success. We’re in 2,500 stores,” she says, citing Whole Foods, Target, Wegmans and, in the Midwest, Heinen’s.

The pizzas—available in four varieties, including crust-only—are also sold online via Amazon, Target and EatBanza.com.

“The next six weeks or so will be exclusively digital, and then starting in the New Year, we’ll be launching this on streaming [television] channels,” Landesman adds.

Banza is running ads on Lyft Halo LED screens as part of an OOH effort it hopes to expand to cities beyond New York and include other types of placements.

“What’s really great about partnering with Lyft Halo is that we’re actually able target based on geos,” says  Landesman. “So for example, we can have specific ads running that mention Whole Foods when the cab is near a Whole Foods store.

“We can be highly contextual with which retailers we’re featuring based on the location of each individual car, which is-super cool and allows us to be extremely relevant in the moment.”