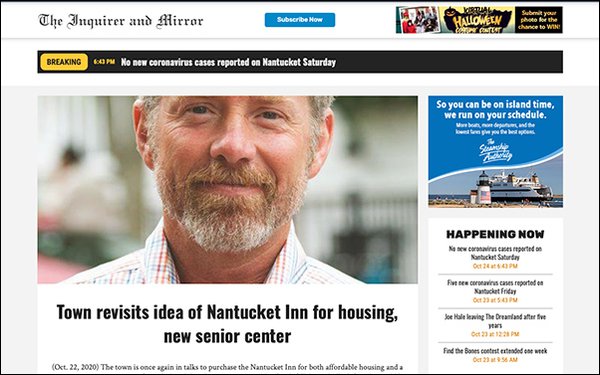 Gannett is selling Nantucket’s weekly The Inquirer and Mirror to 41 North Media LLC, returning the newspaper to local, independent ownership.

The deal is expected to close November 1.

“This is great news,” Inquirer and Mirror editor-publisher Marianne Stanton said in a story published by the newspaper. “Although our corporate parents have largely been ‘hands-off’ with our operations, I’ve always thought the newspaper would be in the best long-term position with local ownership.”

Stanton said David Worth, currently chairman of the board of the Residences at Sherburne Commons Inc., a nonprofit senior-living community, put together “a small group of civic-minded individuals with a long-term history with the island who recognize the value newspapers play in a community and wanted to make this happen.”

Stanton and Worth are both natives of Nantucket and descendants of the original settlers of the island.

Worth is also on the board of the Nantucket Historical Association and recently held the positions of interim executive director at the NHA and the Nantucket Conservation Foundation.

Before retirement, Worth had a 40-year career in international business.

Stanton is the longest-serving publisher of The Inquirer and Mirror; her parents Tom and Marie Giffin once owned the newspaper.

Now, the newspaper “will also be able to reinvest more profits directly into the newspaper to the advantage of our readers and digital audience, as well as back into the island,” Stanton said.

The Inquirer and Mirror has been under corporate ownership for three decades. It was once part of Dow Jones Corp., along with the Cape Cod Times. Both newspapers were sold to Gatehouse, which merged with Gannett last year.

The Inquirer and Mirror is one of the oldest newspapers in the country. First published in 1821, it will celebrate its 200th anniversary next year.