Yes, There Can Be Too Much Of A Good Thing

Given the speed of today’s news cycle, it’s a safe bet that pretty much everyone reading this will by now be aware of two of this week’s headline-grabbing developments: Netflix missing its Q3 subscriber growth projection, and Quibi going belly-up.

Both have received a flood of coverage. And both have inspired a flood of opinions and theories about the reasons behind them and what useful lessons might be gleaned for navigating the exciting but treacherous streaming (wait for it…) “ecosystem.”

On the Quibi front, various pundits have suggested that the failure can be chalked up to a lack of testing and experimentation, the folly of building infrastructure from the ground up, overspending on content, licensing instead of owning content, a flawed distribution strategy, a lack of agility in adjusting to the pandemic, and just plain old poor strategy.

Initially, founder Jeffrey Katzenberg famously attributed the lack of consumer uptake entirely to the pandemic’s having stranded people at home, when Quibi’s concept was dependent on watching short-form videos while on-the-go. But post-closure, he acknowledged to Deadline that how much of the impact was attributable to COVID “will always be unknown.”

The reality behind Quibi’s short but incredibly costly lifespan may well be attributable in part to all of the above. But if the pandemic’s shelter-at-home dynamic was really the key element, how does one account for the massive, even heightened, consumption of TikTok, Snapchat and YouTube during the same period?

Certainly, Netflix isn’t denying that the pandemic supercharged its subscriber growth during much of this year. Indeed, the company attributed its having added 2.2 million instead of its projected 2.5 million in Q3 to having over-delivered on growth in both Q1 and Q2 (adding an impressive 15.8 million and 10.1 million subscribers, respectively, in those periods).

Netflix said the slowdown in Q3 wasn’t due to stiffening competition resulting from the growing number of big-brand video streaming services. The company had already acknowledged that its domestic growth would slow, and that most of its growth going forward will be in international markets.

The extraordinary circumstances of the pandemic not only goosed Netflix’s U.S. performance, but created enough demand to add further momentum to the young but already-thriving Disney+, and also give first-half entrants Peacock and HBO Max welcome but unanticipated boosts.

All of that said, we all know that time and money preclude unlimited demand.

And this week saw the release of a Kantar Q3 Entertainment on Demand analysis that seems to indicate that Netflix is by no means untouched by competition.

NBCUniversal’s Peacock — available in both free, ad-supported and ad-free paid tiers — captured the most new subscribers (17%) during the quarter, followed by Amazon Prime Video (16%), and HBO Max (11.3%), according to this consumer research. Hulu’s video-on-demand service came in at 9.5%, followed by Disney+ at 9.1%, Netflix with 8.3% and Apple TV+ at 4.9%. (Also see the Activate chart at bottom below, which shows Peacock, with 15 million users having already surpassed HBO/HBO Max, with 13 million paid subscribers.)

Then there’s the latest research on the proliferation of streaming services.

For instance, according to Parks Associates’ new OTT Video Market Tracker, as of Q3, there were more than 300 OTT video services in the U.S. -- more than double the number in 2014. 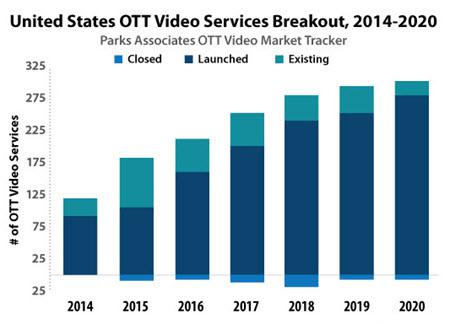 Interestingly, U.S.-based services’ rate of closure has also declined, from a peak in 2018 when 19 services left the market, to only six ceasing operation so far in 2020.

But how long can that keep up?

To provide a global perspective, here’s a summary just released by Activate, for its 2021 Technology & Media Outlook:

No one is suggesting that Netflix, Disney+, Amazon Prime Video, Roku, Hulu and the like will be going anywhere.

But can smaller players effectively compete for original content, or compete in general, with the giants?

“The answer is no,” then-Time Warner CEO Jeff Bewkes declared as early as 2015, notes CNBC. “These companies are competing against Netflix and Amazon, who have massively more scale for both subscription and advertising at a global level. They’re all going to be collapsed. Only Disney will have enough subscribers and global scale under a distinctive family brand to make it.”