Citing First Amendment, Facebook Says It Has Right To Fact-Check Posts About Vaccines 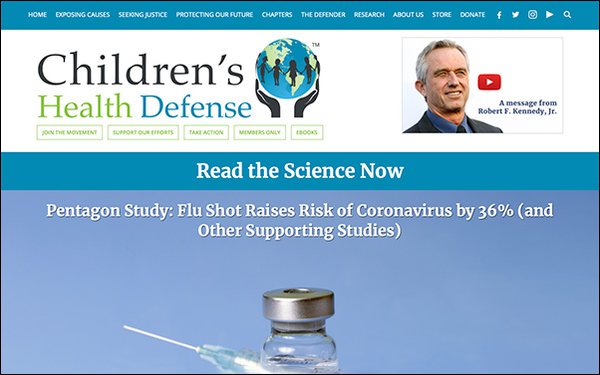 Facebook is asking a federal judge to throw out a lawsuit by the Children's Health Defense, which accused the company of violating free speech principles by telling users that some vaccine-related posts may contain false or misleading information, and restricting the spread of those posts.

The company adds that it is protected by Section 230 of the Communications Decency Act, which shields web publishers from liability over material created by third parties, as well as liability for the publishers' own content moderation decisions.

Facebook's paper come in response to a complaint brought in August by Robert F Kennedy Jr.'s Children's Health Defense, a nonprofit that often posts about vaccines. The group describes itself as advocating “for informed patient consent based on full disclosure of all relevant medical information.”

Children's Health Defense alleged that Facebook collaborated with the World Health Organization and Centers for Disease Control “to suppress vaccine safety speech with a 'warning label and other notices that appear to flag disinformation, but in reality censor valid and truthful speech, including speech critical of those agencies and their policies.”

The organization contends that Facebook and its fact-checkers, including the journalism school Poynter Institute, treat Children's Health Defense posts in ways that create a “false and misleading appearance” that the organization violates Facebook's terms of service by publishing false information about vaccine safety, as well as the safety of 5G networks.

Facebook says in its recent court papers that it flagged six of the group's posts, disabled a “donate” button on the organization's Facebook page and added a warning that alerts users who visit the group's page that the Centers for Disease Control has information about vaccines.

That activity is all protected by the constitution, Facebook argues.

“The First Amendment ... protects Facebook’s moderation decisions, including decisions to reduce the distribution of certain content or restrict access to certain features by those who repeatedly share misinformation,” the company argues.

Facebook also says the Children's Health Defense can't proceed with claims that it was “censored,” because the First Amendment only prohibits censorship by the government, and not private people or companies.

“Facebook exercised its own editorial discretion to reduce the visibility of posts identified as false or partially false,” the social networking platform argues. “The complaint does not plausibly allege that any federal actor was so intertwined with Facebook’s decisions ... that the federal government can be deemed responsible for them.”

Additionally, Facebook argues it isn't legally responsible for the warnings attached to the Children's Health Defense posts because the fact-checking was done by third parties, and Section 230 protects web platforms from liability for third-party posts.

“In making the results of those fact-checks available, Facebook did no more than aggregate information provided by others,” Facebook argues.

The company is asking Illston to dismiss the case with prejudice, which would preclude the Children's Health Defense from revising its claims and bringing them again.

The matter is scheduled for a hearing on February 5.