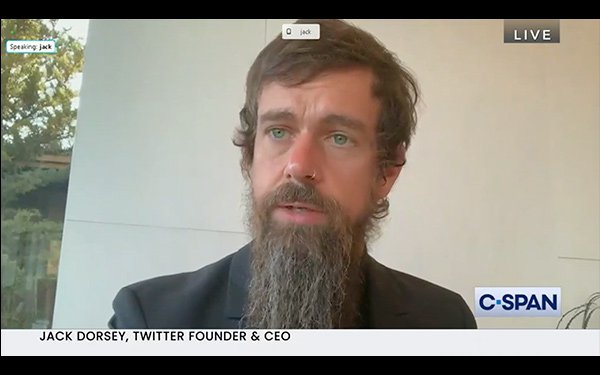 Republican lawmakers at a Senate hearing Wednesday criticized tech company CEOs for supposedly suppressing conservative speech by fact-checking dubious claims and restricting the spread of disputed material, while Senate Democrats blasted the hearing as a “sham.”

The Post's story was based on a purported email from an adviser to the Ukrainian company Burisma, to Biden's son, Hunter, that supposedly said, "thank you for inviting me to DC and giving an opportunity to meet your father.”

The New York Post obtained the hard drive containing the email from former New York City Mayor Rudy Giuliani, who allegedly came into possession of it from his lawyer, who supposedly obtained it from the owner of a computer repair shop. Biden's campaign disputed that the meeting took place.

Twitter initially took steps to restrict sharing that story on its platform, citing a policy against spreading material obtained through hacking. The company later reversed its stance.

The hearing was supposed to be about Section 230 of the Communications Decency Act -- the 24-year-old media law that shields web publishers from liability for how they handle users' posts. But there was very little discussion Wednesday morning about that law or potential revisions to it.

Instead, many Republican lawmakers reiterated concerns that the tech companies were biased against conservatives.

Senate Commerce Committee Chairman Roger Wicker (R-Mississippi) said in his opening statement that there had been a “a long trail of censorship and suppression of conservative voices on the internet,” and that “reasonable observers are left to wonder whether big tech firms are obstructing the flow of information to benefit one political ideology or agenda.”

Senate Democrats, including Brian Schatz (Hawaii) and Tammy Duckworth (Illinois), denounced the hearing as a “sham.”

Schatz added that the hearing was a “scar on this committee and the United States Senate,” and urged the CEOs to “stand up to this immoral behavior.”

“What we are seeing today is United States senators attempting to bully the CEOs of private companies into carrying out a hit job on a presidential candidate by making sure that they push out foreign and domestic misinformation meant to influence the election," he said.

“Do not let the United States Senate bully you into carrying the water for those who want to advance misinformation," the lawmaker added. "And don't let the specter of removing Section 230 protections, or an amendment to antitrust law, or any other kind of threats cause you to be a party to the subversion of our democracy.”